Below is a look at the past 30 years of real estate boom and bust cycles. Financial-market cycles have been around for hundreds of years, all the way back to the Dutch tulip mania of the 1600′s. While future cycles will vary in their details, the causes, effects and trend lines are often quite similar.

In the first 2 charts below, tracking the Case-Shiller Home Price Index for the San Francisco 5-County Metro Statistical Area (MSA), the data points are for January of each year and refer to home values as a percentage of those in January 2000. January 2000 equals 100 on the trend line: 66 means prices were 66% of those in January 2000; 175 signifies prices 75% higher. 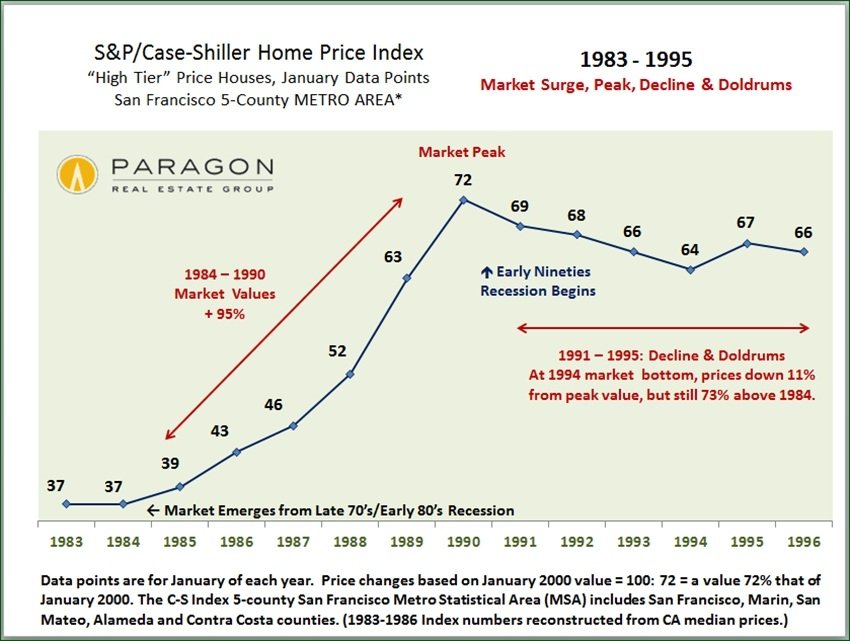 In the above chart, the country is just coming out of the late seventies, early eighties recession – huge inflation, stagnant economy (“stagflation”) and incredibly high interest rates (hitting 18%). As the economy recovered, the housing market started to appreciate and this surge in values began to accelerate deeper into the decade. Over 6 years, the market appreciated almost 100%. Finally, the eighties version of irrational exuberance — junk bonds, stock market swindles, the Savings & Loan implosion, as well as the late 1989 earthquake here in the Bay Area — ended the party.

Recession arrived, home prices sank, sales activity plunged and the market stayed flat for 4 years. Still, even after the decline, home values were 70% higher than when the boom began in 1984. 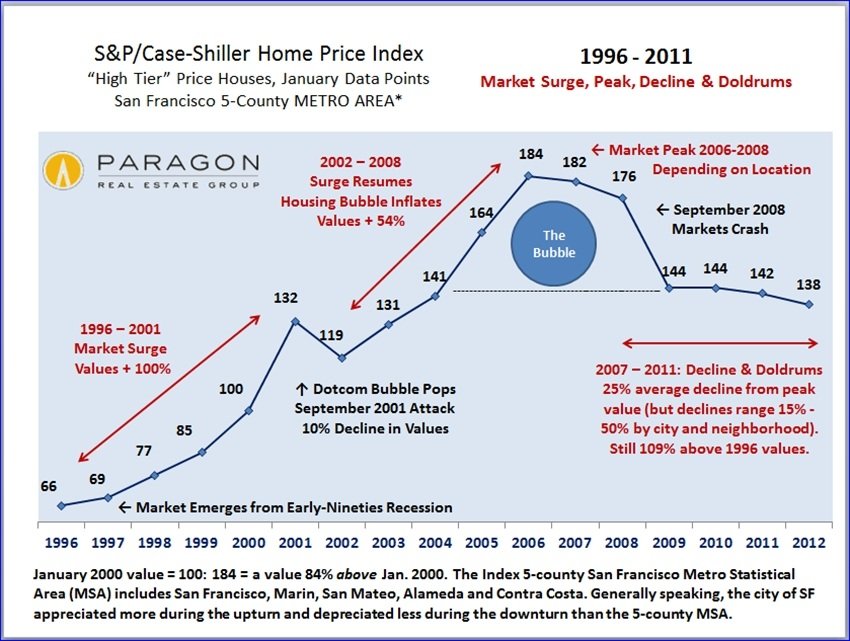 This next cycle looks similar but elongated. In 1996, after years of recession, the market suddenly took off and became frenzied — similar to what we’re experiencing today. The dotcom bubble pop and September 2001 attacks created a market hiccup, but then the subprime and refinance insanity, CDOs and derivatives, Ponzi schemes, books titled “Dow 30,000″ and claims that real estate never declines, super-charged a housing bubble. From 1996 to 2006/2008, the market went through an astounding period of appreciation. (Different areas hit peak values at different times from 2006 to early 2008.) In September 2008 came the market crash.

Across the country, home values fell 15% to 60%, peak to bottom, depending on the area and how badly it was affected by foreclosures — most of San Francisco got off comparatively lightly with declines in the 15% to 25% range. The least affluent areas got hammered hardest by distressed sales and price declines; the most affluent were typically least affected. Then the market stayed flat for more than 3 years, albeit with a few short-term fluctuations.

A Strong but Young Recovery 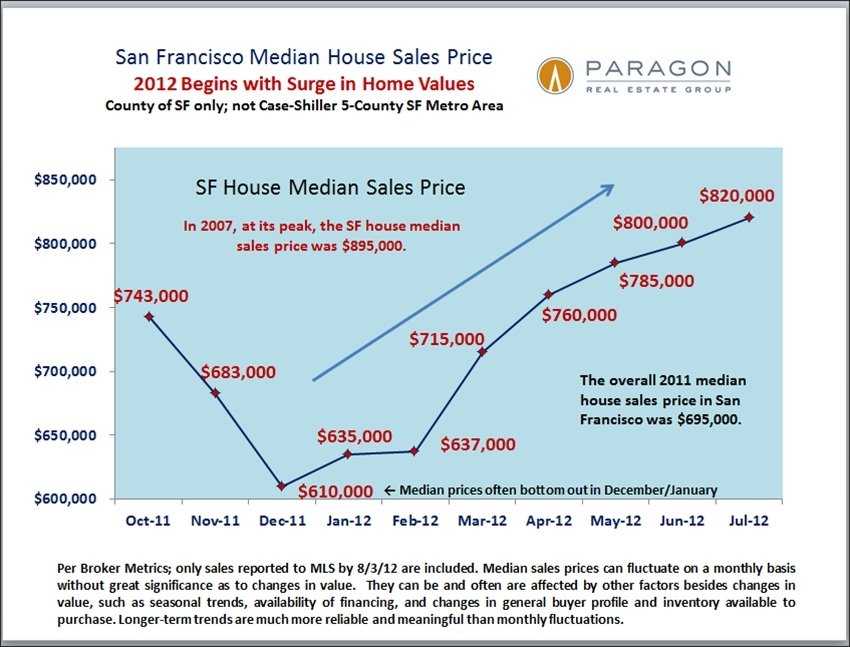 In 2011, San Francisco began to show signs of perking up. An improving economy and growing buyer demand coupled with a low inventory of listings began to put upward pressure on prices. In 2012, as in 1996, the market abruptly grew frenzied with competitive bidding. The city’s affluent neighborhoods led the recovery, and those considered particularly desirable by newly wealthy, high-tech workers showed the largest gains. However, virtually the entire city is now experiencing a high demand-low supply dynamic.

The SF median house sales price has increased dramatically in 2012, though varying widely by neighborhood. But it’s still a baby recovery — though seemingly a healthy one — and the economy remains susceptible to big financial/political crises. However, the greater Bay Area, the state and the country are ALL beginning to show signs of a housing recovery. New home construction is rising, distressed sales are declining, the rent vs. buy equation has turned favorable to buying, and values are ticking up again. 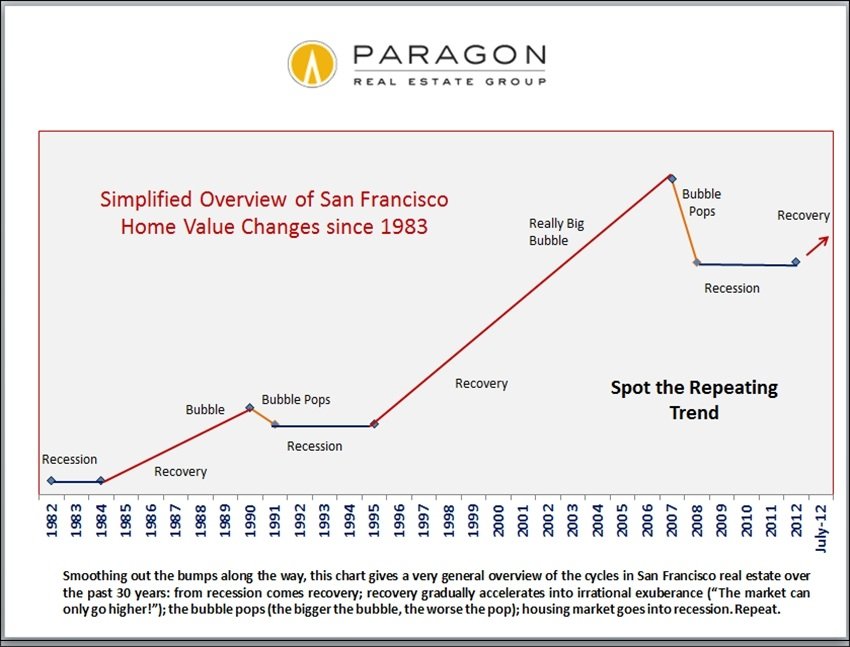 Smoothing out the bumps delivers this overview for the past 30 years. Whatever the phase of the cycle, up or down, while it’s going on people think it will last forever: Every time the market crashes, the consensus becomes that real estate won’t recover for decades. But the economy mends, the population grows, people start families, and repressed demand of those who want to own their own homes builds up. In the early eighties, mid-nineties and now in 2012, after 3-4 years of a recessionary housing market, this repressed demand jumps back in and prices start to rise again. 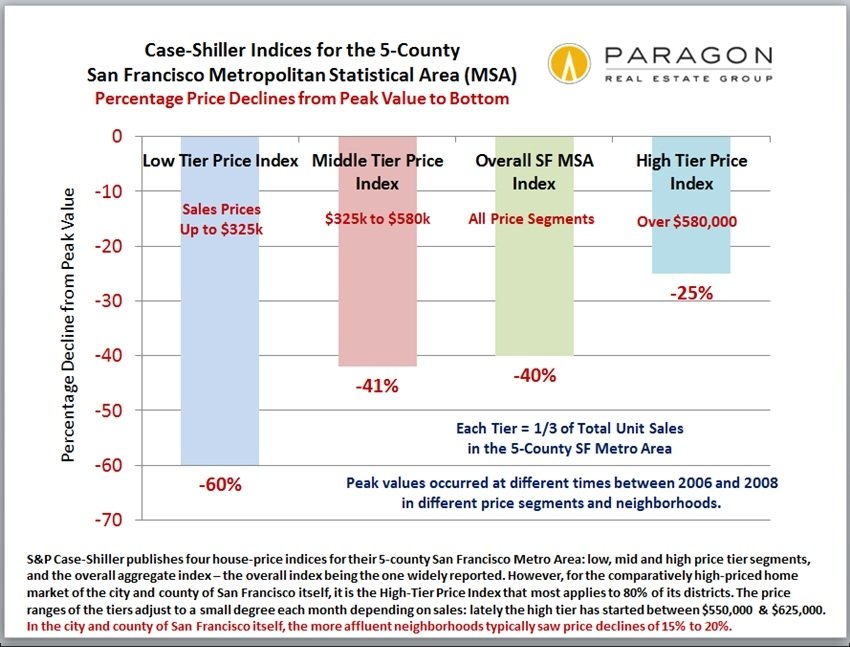 This chart illustrates the huge differences in the degree of value declines suffered by different price segments of single-family housing in the Bay Area: The lower the price range, the greater the percentage of distressed sales and the larger the declines in values. San Francisco, with its expensive housing, suffered less than most places, though it still certainly suffered. Distressed sales never made up the huge percentage of sales they reached in other counties, and now, with the market rebound, distressed-home listings in SF are rapidly declining.

Very generally speaking, the more affluent areas of the city saw a peak-to-bottom decline in the 15% to 20% range; the city’s middle price range saw 15% to 25% declines; and its lowest price segment went down 25% to 40%. Some neighborhoods are now seeing a rapid reversal of those declines.

Is San Francisco an Exceptional Market?

Comparing Rates of Appreciation & Decline with Other Market Areas 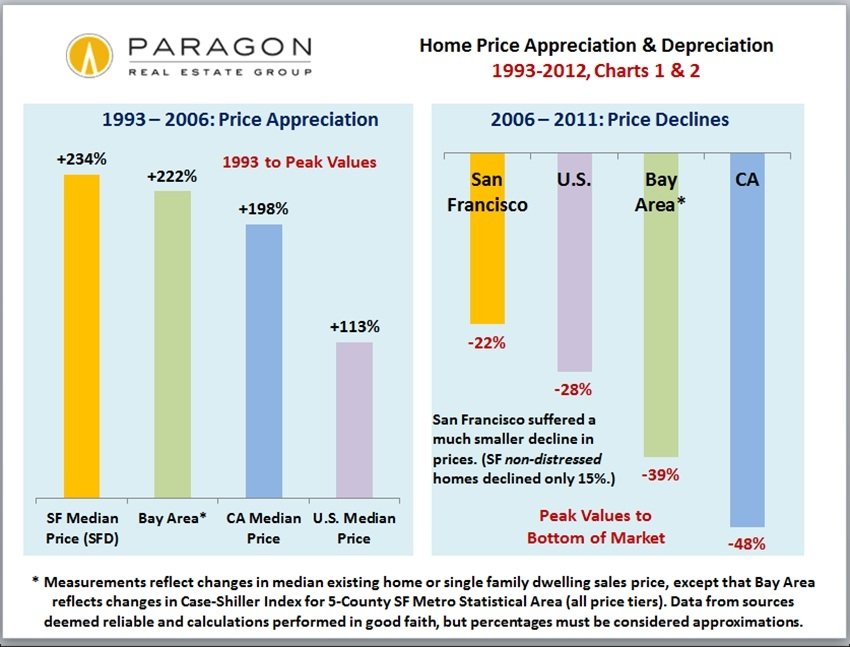 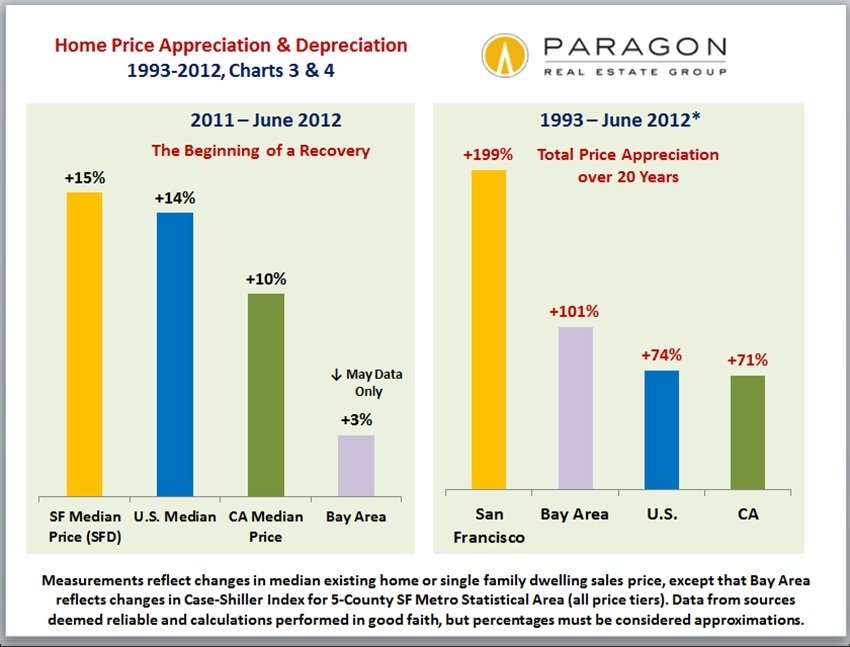 Every market is different, and San Francisco is very different from the rest of the state and country, even from counties across the bay: Demographically, economically, culturally, in its severe limitations on growth — we can’t expand like Las Vegas or Phoenix or most counties — and in its overall desirability as a place to live and work.

The above charts illustrate how that translates into home values. Comparing the city, Bay Area, California and United States over the past 20 years, San Francisco home values appreciated more, declined less after the crash, and now appear to be recovering more quickly.

Calculating home price percentage changes, such as increases to or declines from peak value, are notoriously variable. The most dramatic results — and most often quoted in the media — come from picking the absolute highest value or lowest value month as the point of comparison. But monthly data often fluctuates dramatically without great significance, and we typically prefer quarterly or annual statistics if available. However, if a market is changing quickly, then monthly data must be used to illuminate the incipient trend. Still, sustained longer-term trends are always the most meaningful.

The above charts use a variety of data sets: S&P Case-Shiller Indices, San Francisco MLS sales and median sales prices from state and national Realtor Associations. Each has its own specific market area, property types and time period tracked, and methodology. These analyses were performed in good faith to create what we believe are true, if only approximate, reflections of market trends over time.