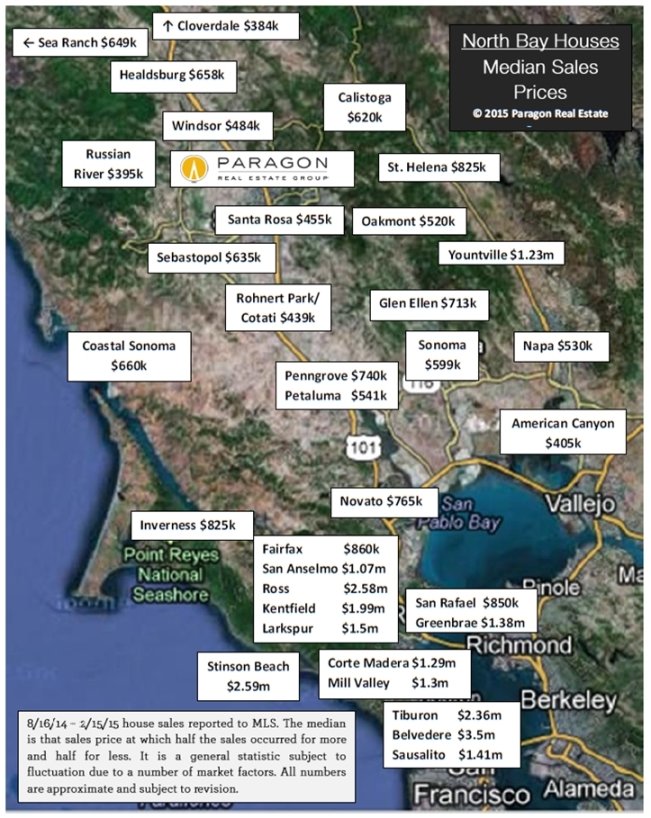 City median sales prices may change – sometimes significantly – depending on the exact sales period being assessed.

Preliminary statistics and indications on the ground in the hurly burly of deal-making are sending signals of another dynamic spring real estate market in Marin. If it continues to develop as it’s looking right now, with growing buyer demand vs. an inadequate inventory of homes for sale, this would make the 4th strong spring selling season since the market recovery began in early 2012.In February, the median sales price for Marin houses was $980,000, and the median condo sales price was $505,000. For the last year, the title for highest median home price in California has gone back and forth between Marin and San Mateo Counties. Apples to apples, San Francisco has even higher prices, but because so many of its sales are now 1 and 2-bedroom condos, its overall median sales price is lower. Of course, between and within counties, values vary enormously between communities and neighborhoods. 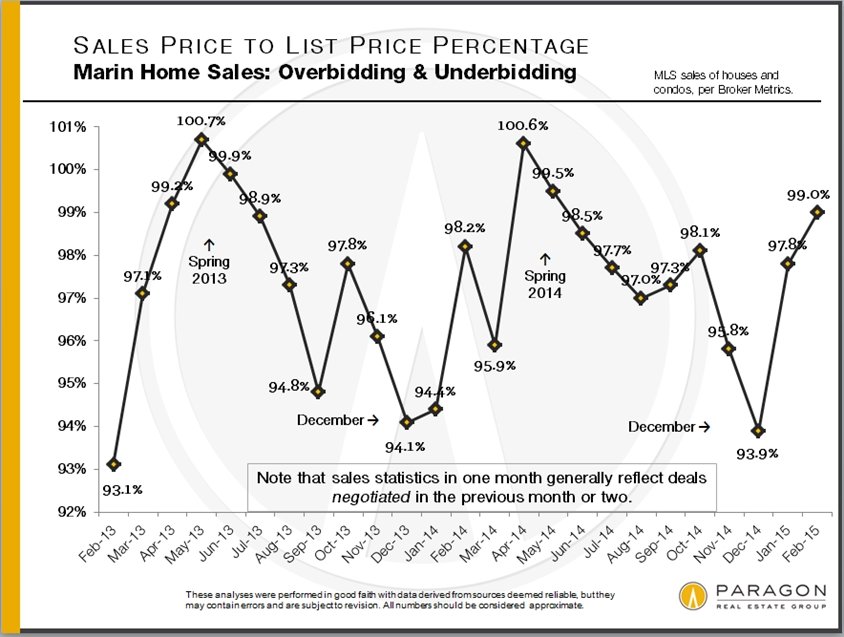 For the last few years, the average sales price to list price percentage has been peaking in spring as the market heats up, and bottoming out in December after the market goes into hibernation for the holidays. Right now, the market is in rapidly-warming-up mode.

As a point of comparison with the frenzied San Francisco market, which has been supercharged by the high-tech boom, the average SF home sale in February closed for 8% over asking price. And it is expected to go higher in coming months. 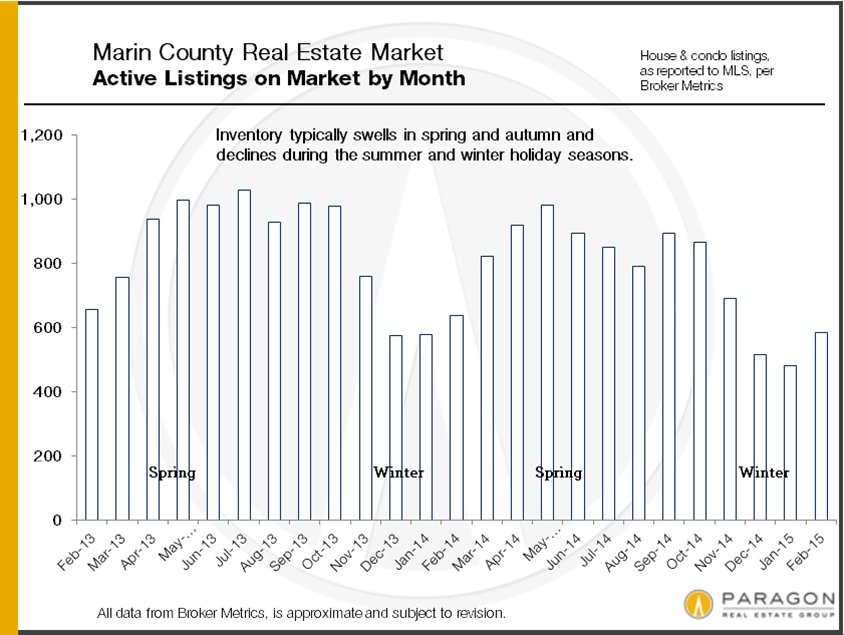 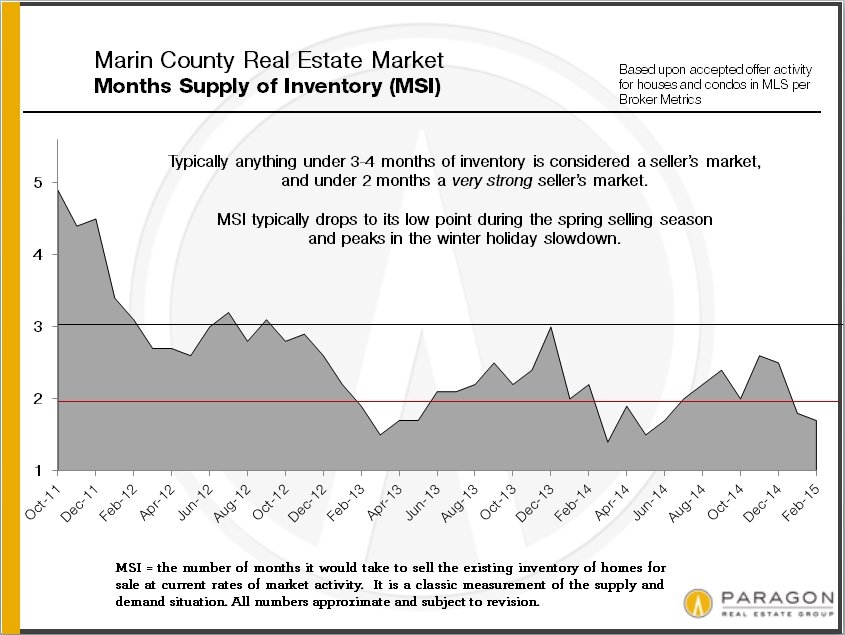 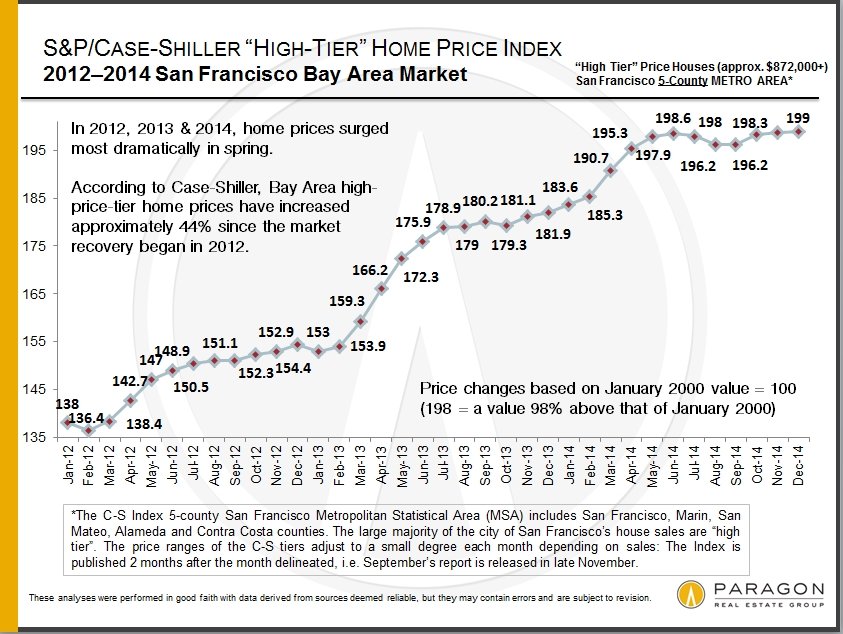 Seasonality in the Bay Area often has more to do with winter and summer holidays than the weather since, unlike back east, January and February can seem more like spring. New listings and overall inventory bottom out in December, and then slowly rise in the new year. One factor that heats up the market is when buyers wake up after the holidays and jump back into the market much earlier than sellers put homes up for sale in quantity. For the past 3 years, this unbalanced dynamic between the high pressure of buyer demand pushing against an insufficient supply of listings typically caused significant home-price increases in spring. We shall soon see if prices can jump higher again in coming months. 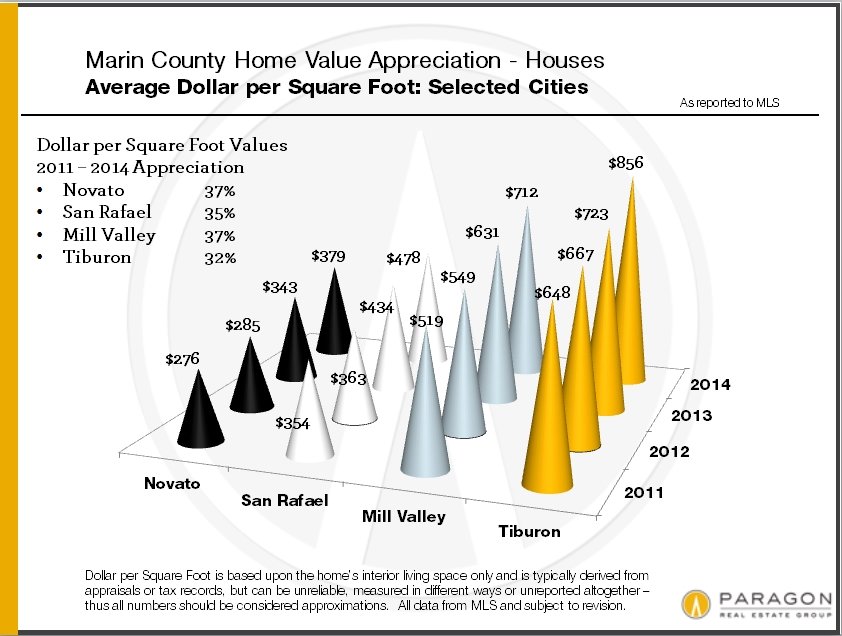 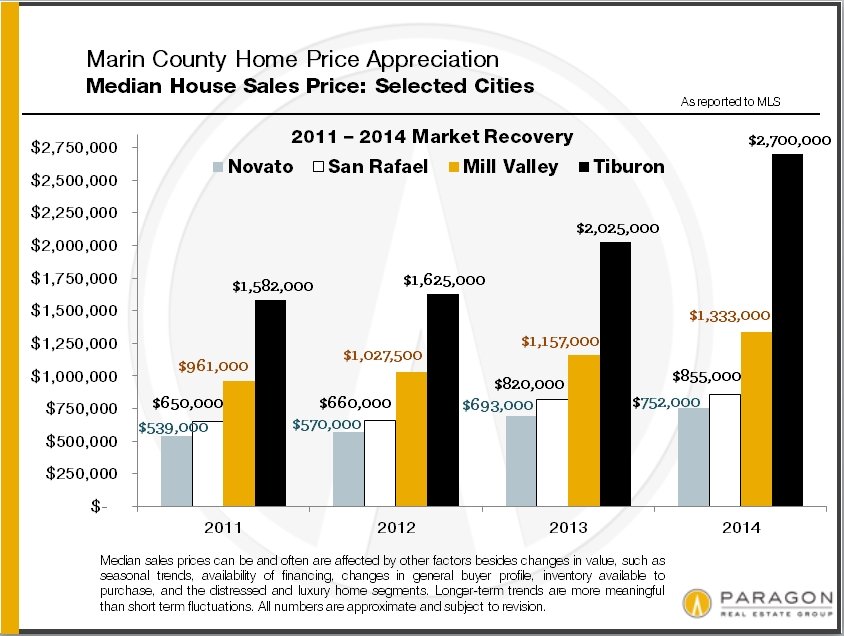 We picked four sample Marin cities in southern, central and northern Marin to illustrate house values and appreciation trends – using average dollar per square foot and median sales price – since the bottom of the market in 2011. Many factors can influence these statistics and each home sale reflects a relatively unique bundle of location, construction and condition, amenities and circumstances. Each year contains a unique basket of such sales, which makes these statistics big, approximate generalities. For example, the average size of a house sold in Tiburon increased from under 2900 square feet in 2011 to almost 3500 square feet in 2014. That 21% increase in size is obviously going to impact median sales price above and beyond any general appreciation in values. Still, generally speaking, we believe the overall appreciation trend lines in the above charts to reflect market changes over the past 4 years.What these statistics signify regarding the value of any particular property is unknown without a specific comparative market analysis. 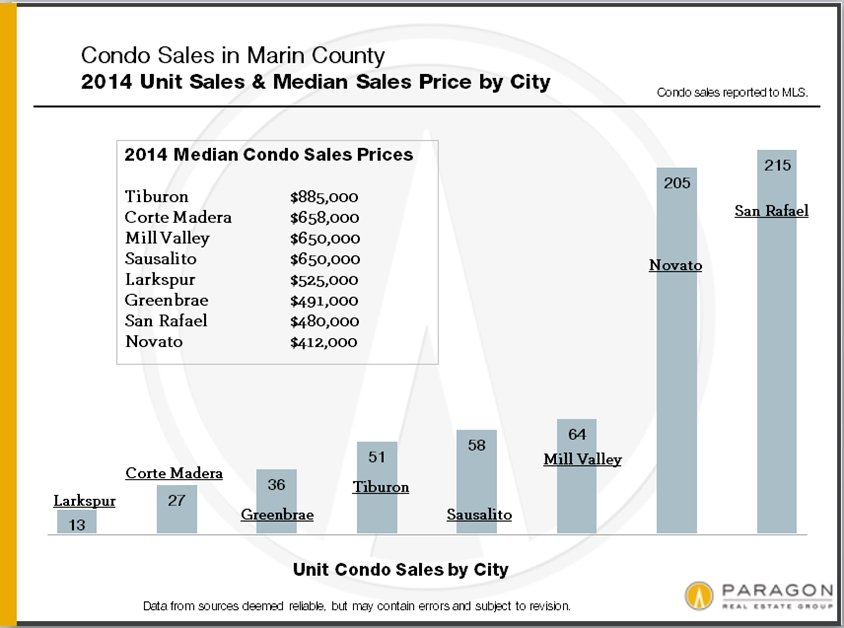 Condo sales make up about 25% of home sales in Marin. This chart shows where condo sales are clustered within the county and the median condo sales price for each city 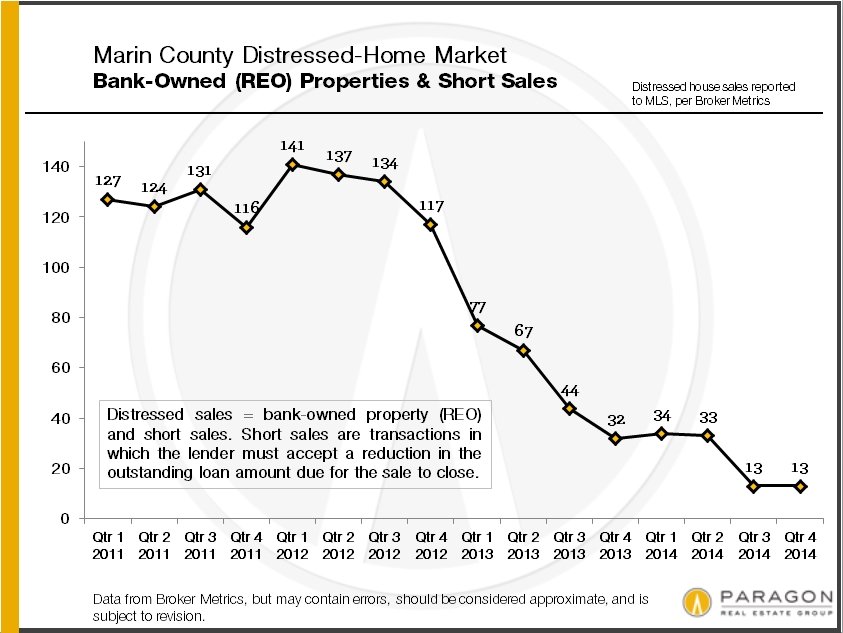 High-priced counties such as Marin and San Francisco were never as drastically affected by subprime lending, foreclosures and distressed property sales as less affluent counties. At the bottom of the market, distressed sales accounted for 20% to 25% of sales here – which was bad enough – as compared to the 50% to 60% of sales in counties such as Solano and Alameda (where it approached catastrophic proportions).And now distressed property sales are dwindling away to insignificance as far as impacting the Marin real estate market.

The real estate market is often spoken about as if it was a single monolithic entity performing in a consistent way – but nothing could be further from the truth. Markets vary enormously between states, cities, neighborhoods, property types and price segments. The S&P Case-Shiller Index looks at the Bay Area market* by breaking all house sales into 3 price segments – low, mid and high price tiers – each containing one third of the total number of sales.The exact price range of each tier changes as the market appreciates or depreciates, or more sales occur in one price range than another: Right now, the “high-price tier” for the 5-county SF Metro Area starts at $872,000. As a point of comparison, in February of 2012, the high tier started at $537,000.Breaking down the market by price segment is a vast over-simplification – there are many other factors at play – but generally speaking, the lower the price range, the more the housing segment was impacted by subprime lending in 2003 – 2006. In turn, that caused the larger price bubble, and then the bigger crash as the foreclosure/ distressed-property crisis took hold.Most Bay Area counties are dominated by homes in 2 price tiers, low and mid-price (such as in Alameda and Contra Costa), or mid and high price (Marin and SF), but there are pockets of homes in all tiers within most counties. The numbers in the 3 charts below all relate to a January 2000 value designated as 100. Thus a reading of 199 indicates a home price 99% above that of January 2000.

The low-price third of sales was massively impacted by subprime and predatory lending – people buying homes they couldn’t actually afford. It experienced an insane appreciation rate of 170% from 2000 to 2006, creating an enormous bubble. It then crashed by a catastrophic 60% due to the distressed-home phenomenon. As distressed sales dwindled, the recovery since 2012 has been spectacular, up 81%, but prices are still well below peak values and may not re-attain them for years. (If prices go down 60%, they must go back up 148% to get back to where they started.) Many homes in Alameda, Contra Costa, Napa, Sonoma and Solano* counties fall into this market segment.Interestingly, this price segment was not impacted by the popping of the dot-com bubble, perhaps because these homeowners and buyers were less likely to be speculating in the technology stock market. 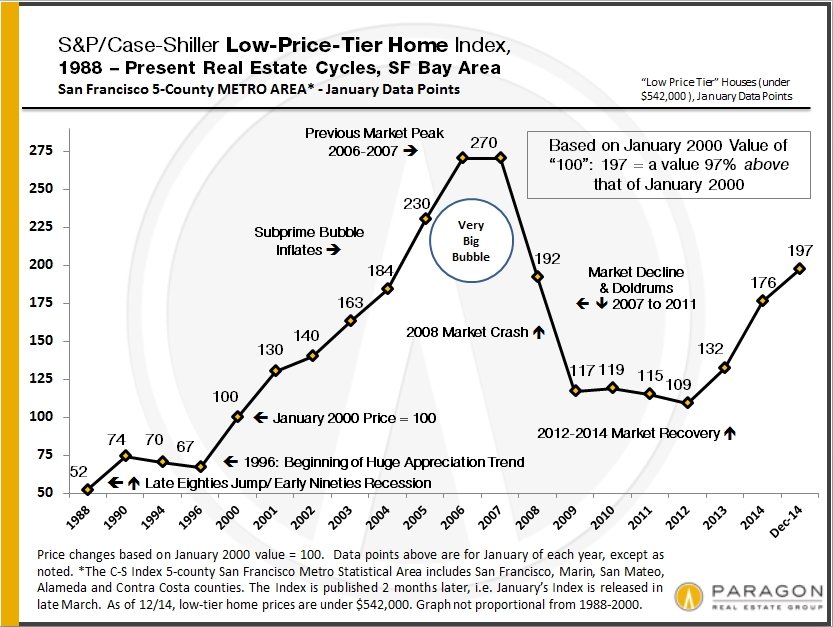 The mid-price segment was less hammered by subprime, but still significantly impacted. Its appreciation rate was 119% from 2000 to 2006 and its market then crashed about 42% before starting its recovery in 2012. This segment is now up 55% from the bottom and close to its 2006 peak value. Many homes in the northern half of Marin and the southern border neighborhoods of San Francisco fall into this price segment. 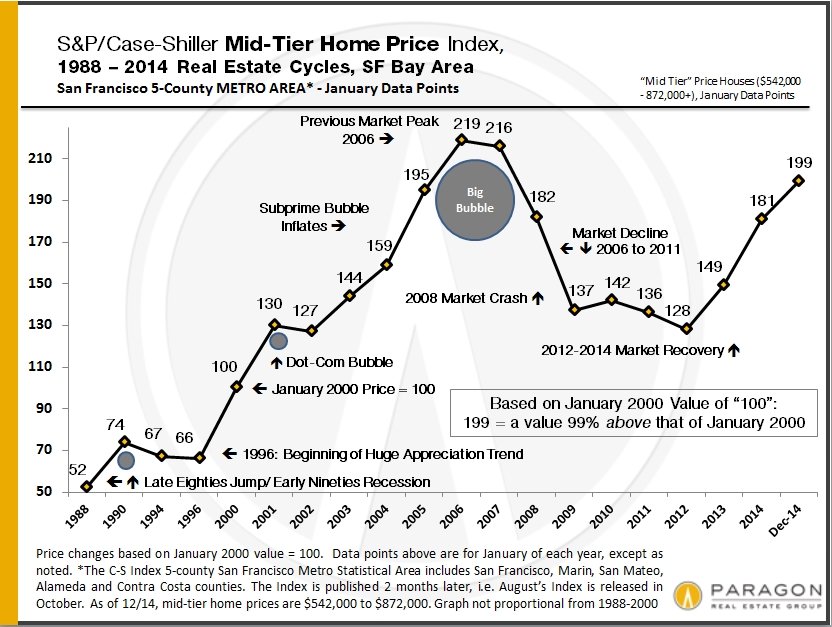 Most of the houses in Marin (especially southern Marin), San Francisco and San Mateo, as well as affluent areas in other counties, fall into the high-price third of Bay Area sales, which was not deeply affected by subprime lending and foreclosure sales. Though its bubble and crash seemed dramatic enough to those experiencing them, they were much smaller: It appreciated 84% from 2000 to 2006, including a hiccup drop in 2001 after the popping of the dot-com bubble, and then fell about 25% (compared to 60% for the low-price tier). Its strong recovery since 2012, up about 44%, has now put this segment approximately 8% above its previous peak value in 2006. 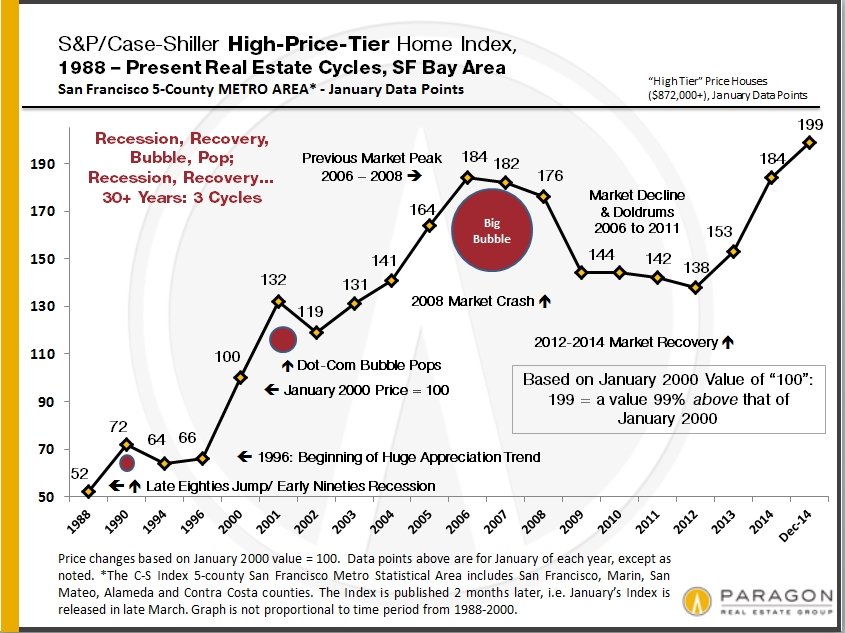 Many neighborhoods in San Francisco, Marin and San Mateo would easily qualify for an “ultra-high” price segment, and it remains generally true that the higher the price, the smaller the crash.Though the price tiers had radically different bubbles, crashes and recoveries, all 3 are now almost exactly the same in relation to the year 2000, showing appreciation of 97% to 99% over the past 15 years. This suggests equilibrium is once again being achieved between them.* Technically the Case-Shiller San Francisco Metropolitan Statistical Area is comprised of San Francisco, Marin, San Mateo, Alameda and Contra Costa counties, but we believe its general trends apply to other Bay Area counties as well.

These analyses were made in good faith with data from sources deemed reliable, but they may contain errors and are subject to revision. Statistics are generalities and how they apply to any specific property is unknown without a tailored comparative market analysis. Sales statistics of one month generally reflect offers negotiated 4 – 6 weeks earlier, i.e. they are a month or so behind what’s actually occurring in the market as buyers and sellers make deals. All numbers should be considered approximate. Please contact us with any questions or concerns.