Typically, the real estate market slows down during the summer months – a period often called the summer doldrums — but that certainly did not occur this year in San Francisco: unflagging buyer demand continued through August. The market recovery that began in some SF neighborhoods late last year has now spread throughout the city. Bay Area, state and national home markets are also showing clear, if still early signs of turnaround.
******************************

It’s rare that the 3 main statistical measurements of home value line up so perfectly, but comparing this summer’s house sales to last summer’s shows 12% increases across the board. Which doesn’t mean uniform appreciation for SF homes: changes in value vary by property and neighborhood. This analysis and the one following are for non-distressed sales in the city’s 8 northern and central districts, which generally run north of the Sloat Blvd/ Highway 280 line: The 2 southern districts were hit much harder by foreclosures and though they too are recovering quickly, mixing in their data distorts the results. During this 3-month period, house sales volume in the 8 districts was up 5% in units and 18% in dollar volume — and would be up much higher if more inventory had been available. Average days on market fell from 52 days to 39 days year over year. 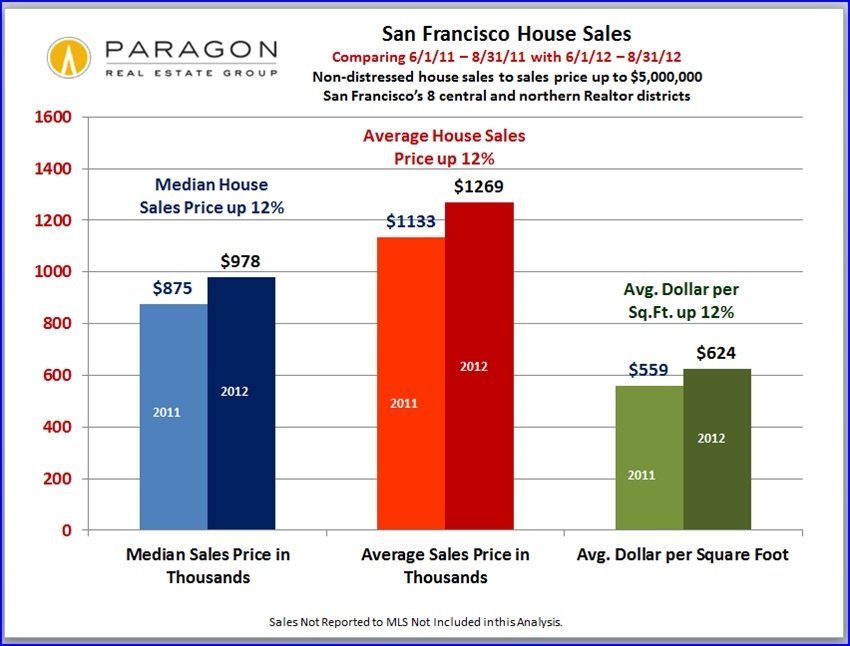 The condo statistics don’t line up quite as neatly, but nearly so: they’re up from 9.4% to almost 12.5%, with the average being about 11%, which is very close to the 12% increase seen in houses. (Remember: these statistics are generalities regarding the sale of many hundreds of relatively unique homes.) Closed sales follow the time when new listings hit the market and offers are negotiated by 4 to 10 weeks, so these charts reflect the market from April through July. Non-distressed condo sales volume in the 8 northern/central city districts during this 3-month period is up 41% in units and 54% in dollar volume from last summer, and average days on market dropped from 69 days to 47 days. 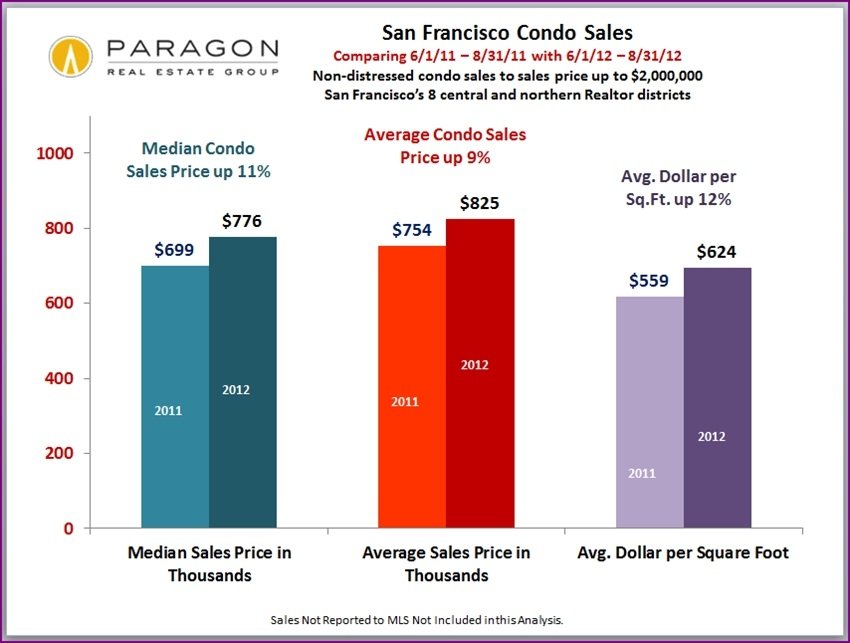 Most Listings Selling At or Over Asking Price

San Francisco is currently seeing remarkable percentages of homes selling above and sometimes far above the asking price: 64% of house sales and 45% of condo sales in August closed at above list price, and solid percentages sold at 10% higher or more. This is perhaps as good a snapshot as any of the ferocious heat of buyer demand right now. (Sales that were within a quarter percent of 100% were considered “At List Price.”) 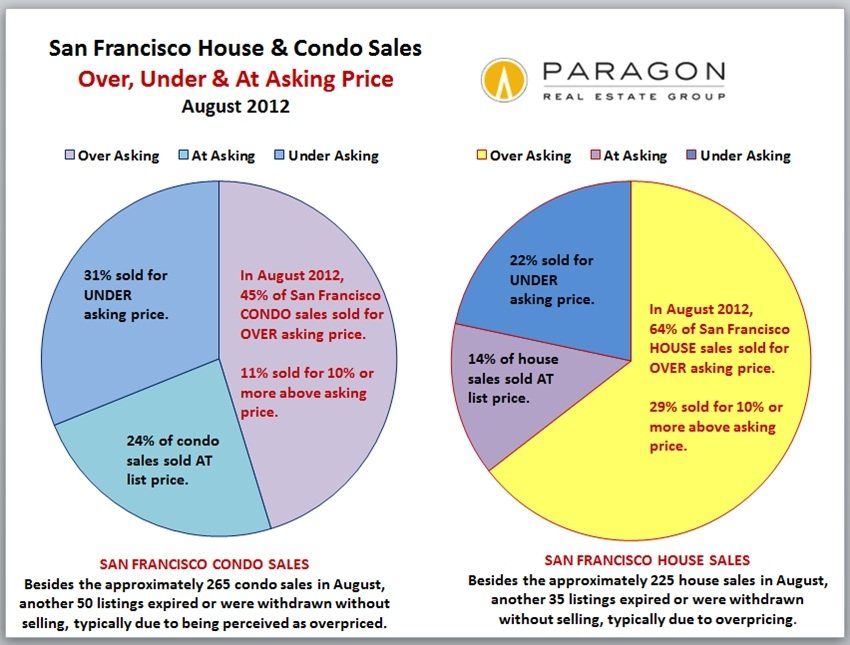 No summer slowdown is showing up in this important metric of supply and demand. 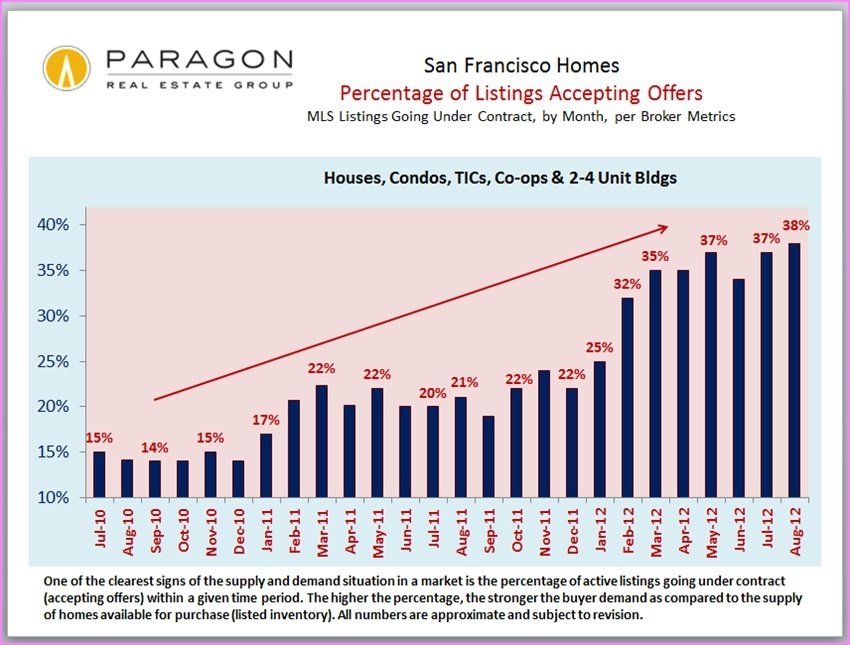 Over two thirds of SF listings are selling quickly at an average of almost 4% over the asking price. Those listings that go through one or more price reductions take much longer to sell (over 2 1?2 months longer on average) to close at a significant discount to original price. For every listing selling after a price reduction, another listing expires or is withdrawn without selling, typically due to being perceived as overpriced. The keys to getting the best price for your home: price it right to begin with; prepare it to show at its absolute best; comprehensively market it to buyers and agents; negotiate offers aggressively. And it doesn’t hurt to take advantage of a low inventory/high demand market. 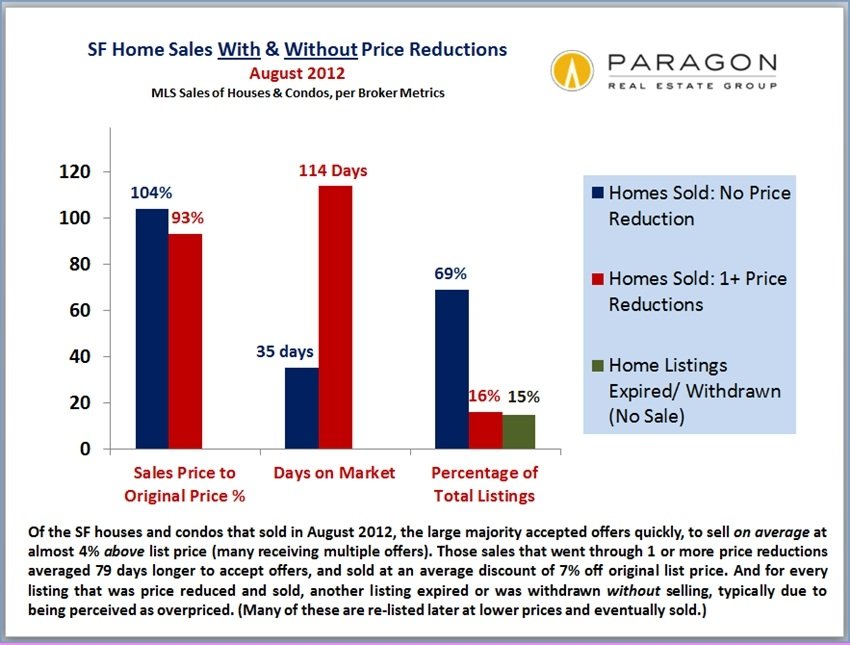 Distressed house sales – bank-owned and short sales – are clustered in the city’s two southern districts, running from Bayview to Oceanview. However, these listings are rapidly declining as the market turns around and values increase: distressed house sales have dropped from 20% of sales in 2011 to 12% in August 2012. This becomes a virtuous circle of market recovery: higher values mean fewer distressed listings; fewer distressed listings lessen their (significant) negative effect on neighborhood home values. 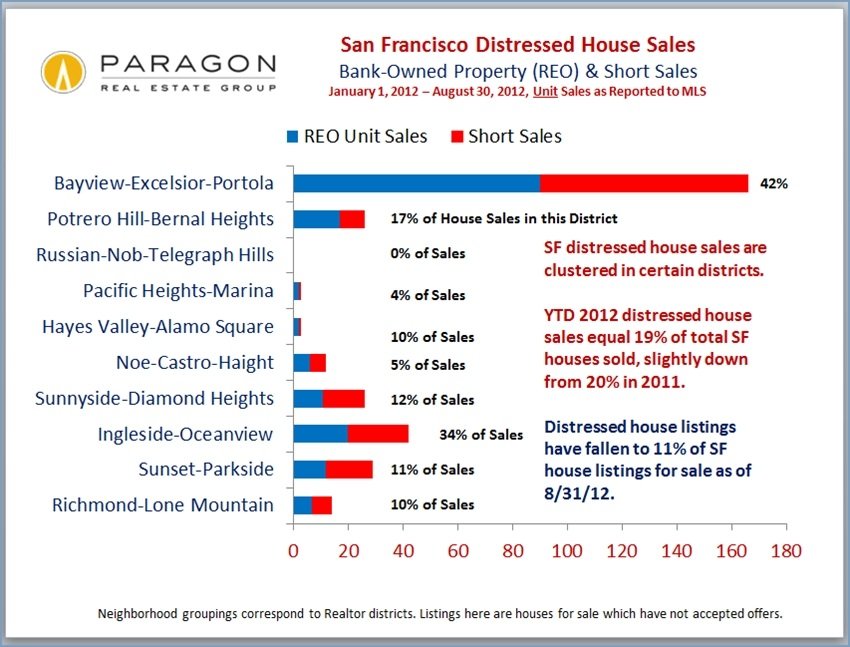 The distressed condo segment of the SF market is dwindling rapidly both as a percentage of total sales (from 20% in 2011 to 14% YTD, and 10% in August 2012), and even more dramatically, as a percentage of listings for sale (down to only 4% as of August 31). The greatest number of distressed condo sales has been in the greater SoMa/ South Beach area, where so many of the new, big developments were built over the past 10-15 years, but the impact of these sales is shrinking very quickly everywhere in the city. 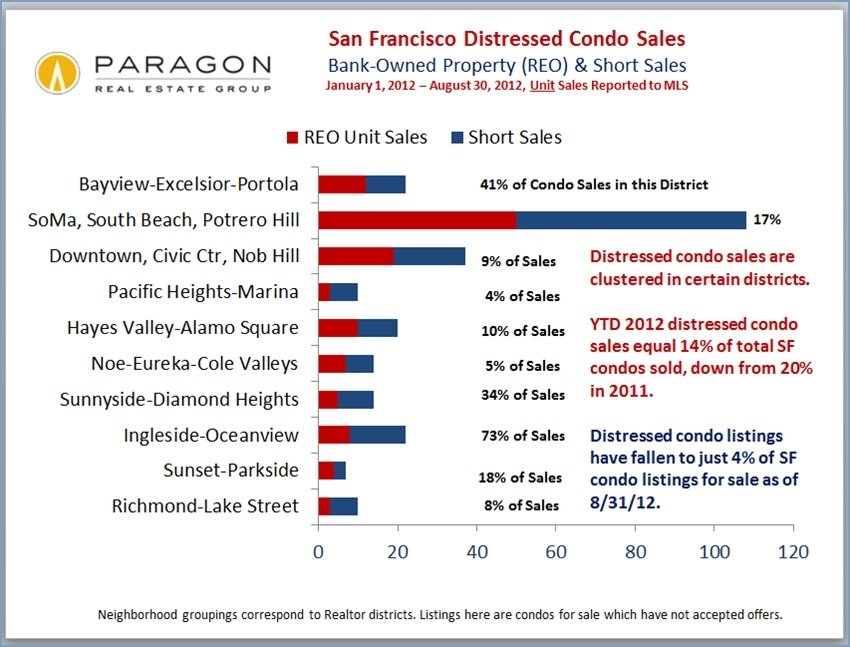 Condo and 2-4 unit building unit sales are up over 20% from last year this time – this time comparing a six-month period of each year. House sales — and indeed sales of all types — would certainly be up by a much greater percentage if there were simply more listings for buyers to purchase. 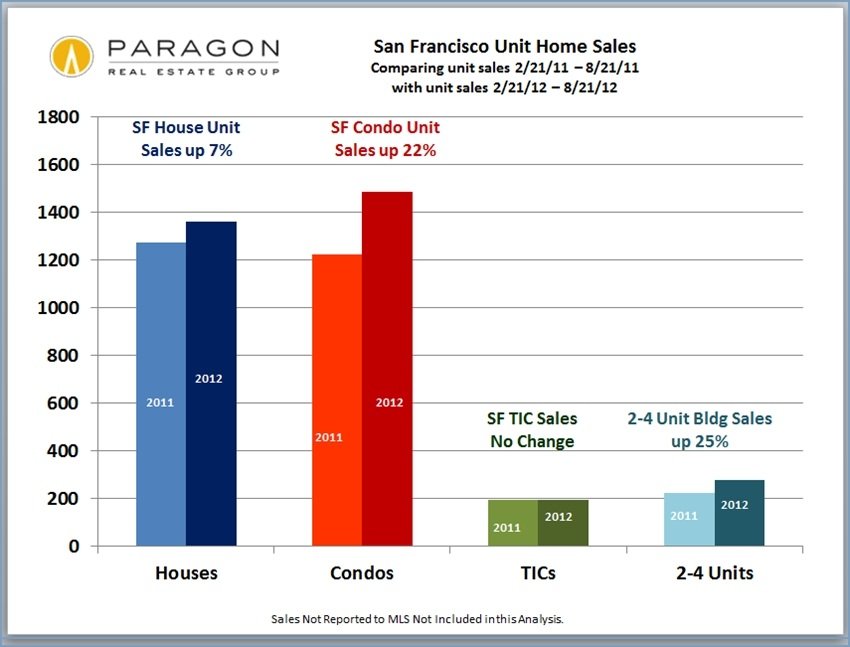 There’s no ambiguity in this chart: An inadequate number of new listings and extremely high demand have kept the inventory of listings available to choose from on any given day lower than at any time in recent memory. It’s not unusual for September to bring a large burst of new listings to fuel the autumn sales season: in this chart, you can see the big jump in September 2010 and the smaller surge in September 2011. Buyers and their agents are certainly praying for a surge in inventory to alleviate the intense competition for available homes. 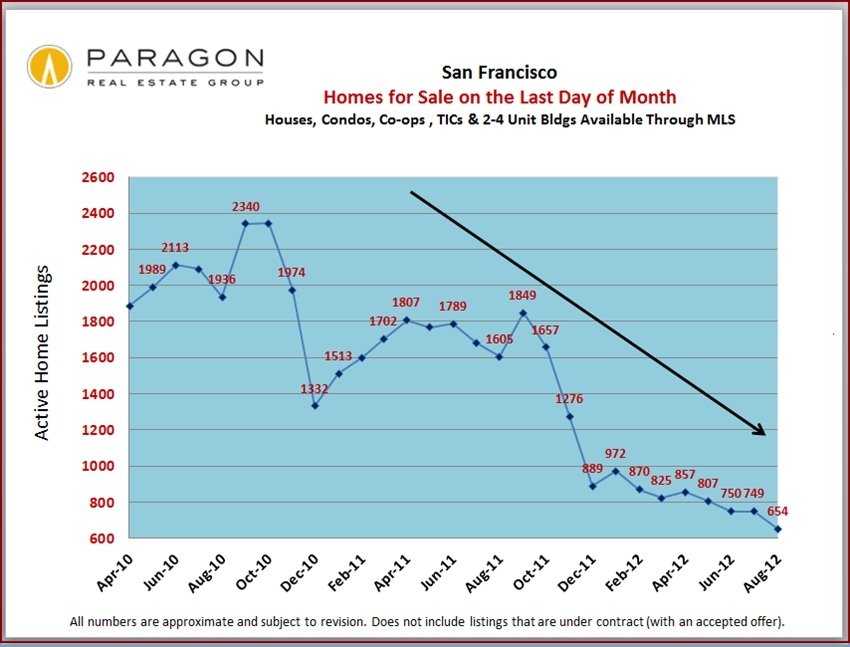 Days on Market Continue to Decline

The trend is clear: listings are selling much more quickly. Though 37 days as an average is very, very low — nationally, there’s excitement that the figure just fell to 69 days — many new listings in the city are accepting offers within 7-10 days of coming on market. 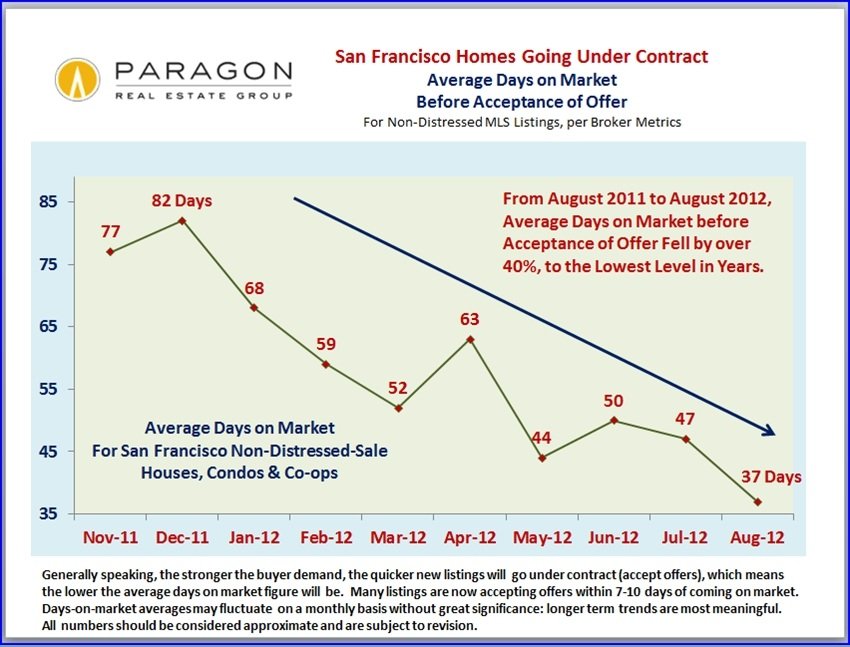 We just completed our detailed semi-annual survey of SF home values. This is one of seven charts: the complete report can be found by clicking on the Market Dynamics Charts link in the footer below and then selecting Neighborhood Values from the sections listed on the upper left of the webpage. 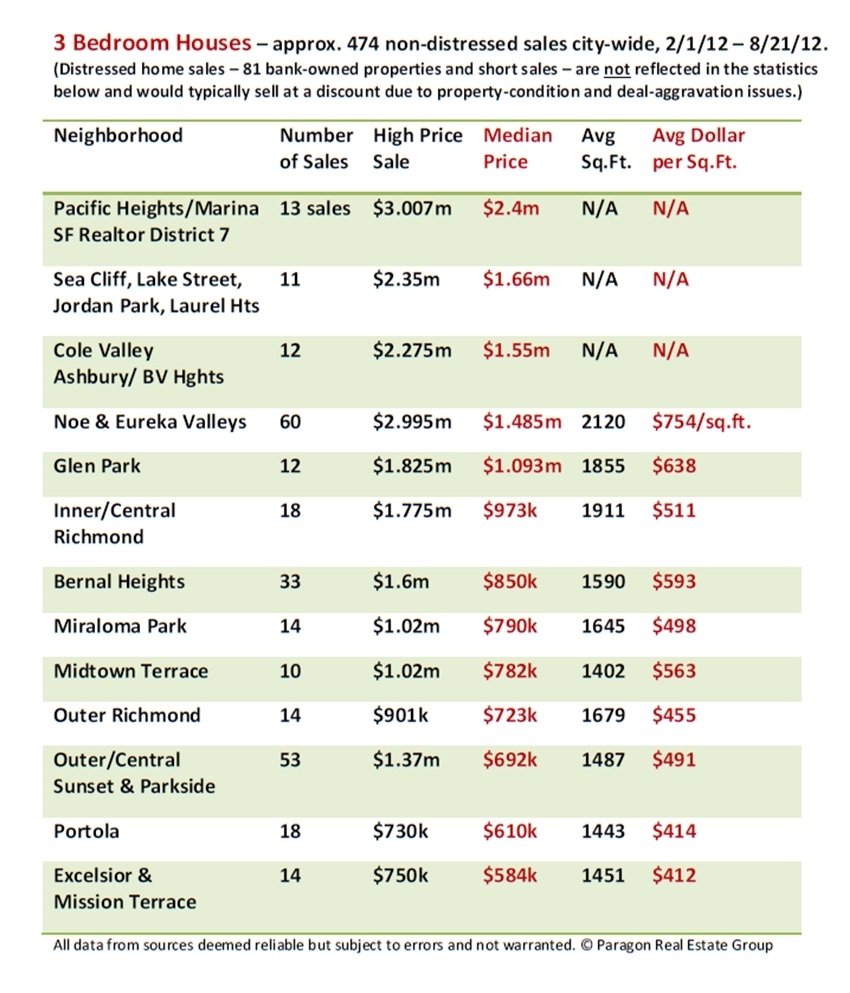