Since the market recovery began in 2012, various districts have taken the lead as the hottest markets in San Francisco: The affluent and prestigious Noe-Eureka-Cole Valleys district and Pacific Heights-Marina district led the recovery out of recession. Later South Beach/SoMa, Hayes Valley and, especially the Mission, went white hot as the high-tech boom surged (though, honestly, high appreciation rates became general throughout the city). In mid-2015, price appreciation in many the more expensive and fashionable districts started to slow down and plateau.

With the search for affordable homes, and houses in particular, becoming ever more challenging (or desperate), the greatest pressure of buyer demand moved to a large, lopsided curve of historically less expensive neighborhoods running along the western-most edge of the city from Outer Richmond south to Lake Merced, then east across the southern border with Daly City, and up through Bernal Heights and Bayview. Of these, we believe Realtor District 2, Sunset/Parkside, with its quiet streets and low crime rates; its closeness to the beach, GG Park and highways south to Silicon Valley; and its attractive, modest-sized houses built mostly in the 1930’s and 1940’s, is now the hottest, most competitive market in San Francisco. 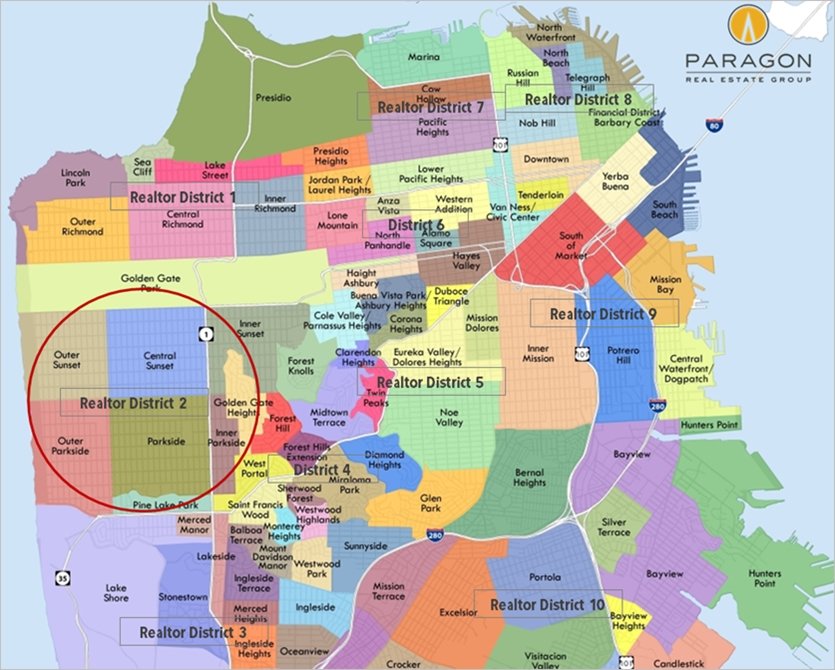 In the charts below, notice how year-over-year statistics have generally cooled somewhat in most areas of the city from the frenzied market prevailing in the first part of 2015: higher days on market, lower percentages of listings selling over asking price, higher months-supply-of-inventory figures, and so on. The most affordable districts are those generally showing the least, or even no, change year over year, and some of them are still sizzling. However, the 2016 statistics for SF house sales in no way suggest what would be described as a weak market in any of the city’s districts. (Some of the condo markets have cooled more significantly.) 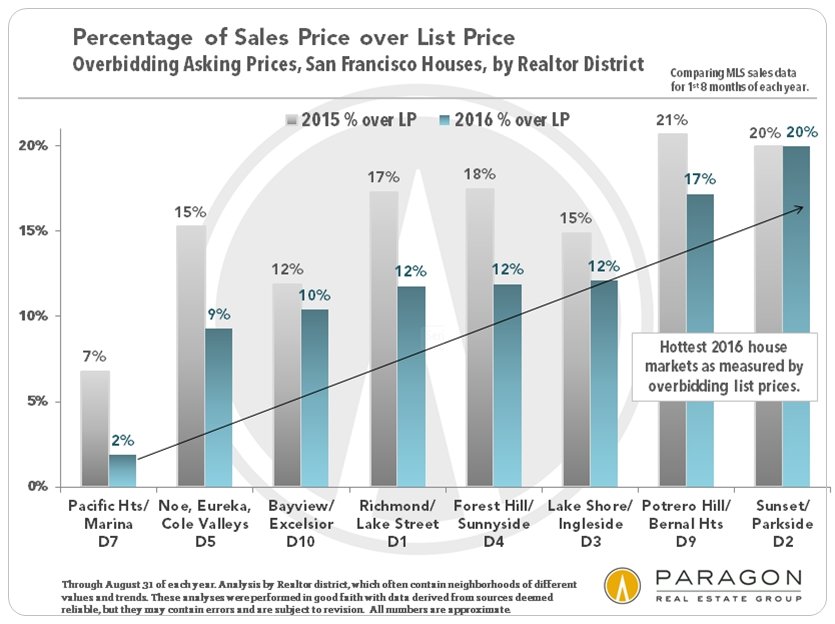 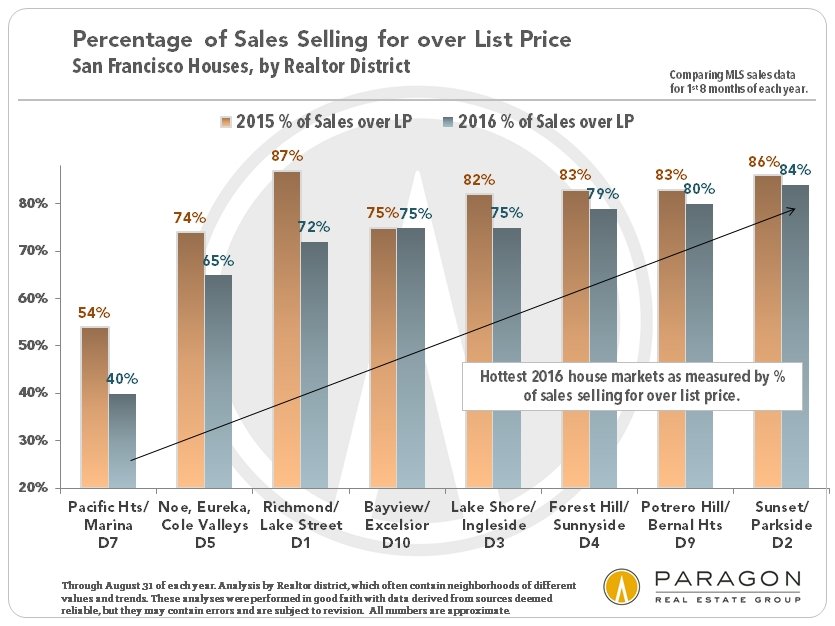 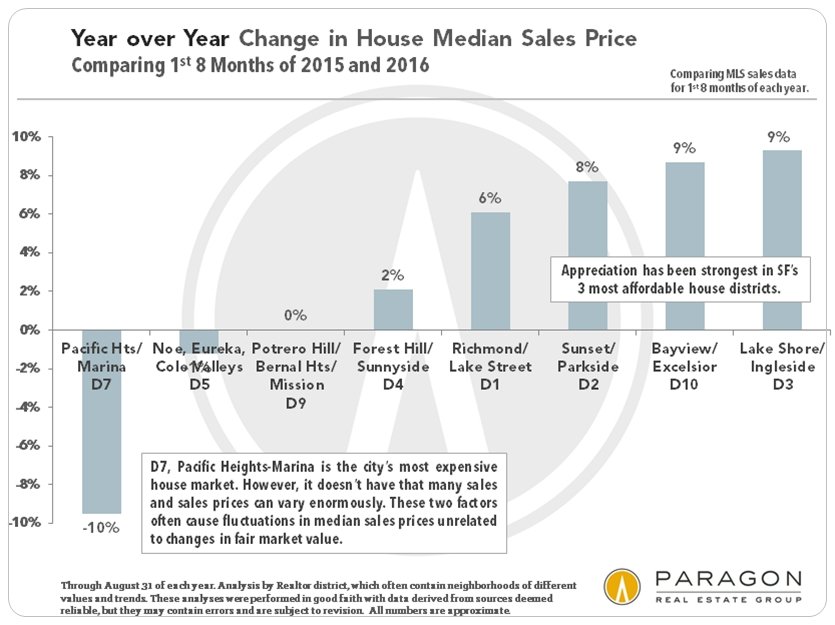 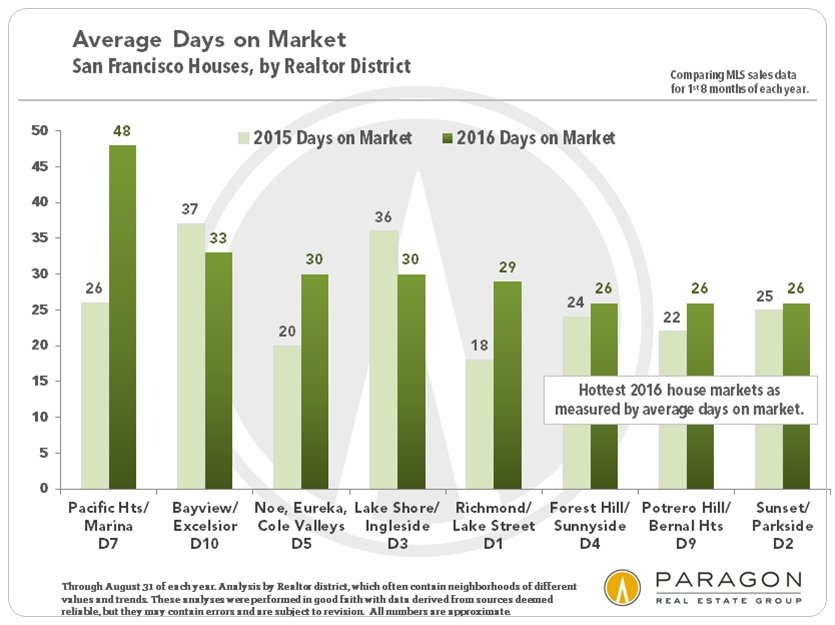 Months Supply of Inventory:
Buyer Demand vs. Supply of Listings for Sale 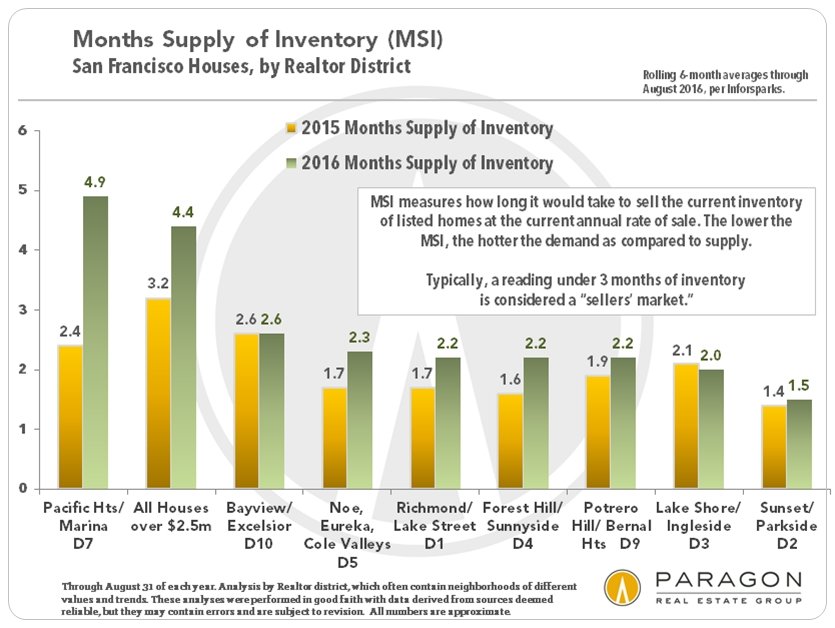 For a number of reasons, including a significant increase in new-construction projects, the condo market in San Francisco is not as strong as its house market, but without any hint of an impending crash: The median SF condo price has simply plateaued after years of feverish appreciation. Based upon our analyses of underlying market dynamics shown via the charts below, we believe the condo markets of the Noe, Eureka and Cole Valleys district, and the Richmond/Lake Street district are currently the most dynamic in the city. It is probably no coincidence that these areas are seeing comparatively little new condo construction adding to inventory.

The softening of the condo market is clearly reflected in the 2016 vs. 2015 statistics. The first chart also illustrates, as mentioned in earlier reports, how the luxury condo segment ($2m+), especially in District 9 (greater SoMa/South Beach/ Yerba Buena) where the majority of new, luxury condo construction is occurring, has softened the most. These charts do not include the many hundreds of newly built or under construction condos listed, accepting offers or sold, which are not reported to MLS, as exact data on that activity is hard to verify. 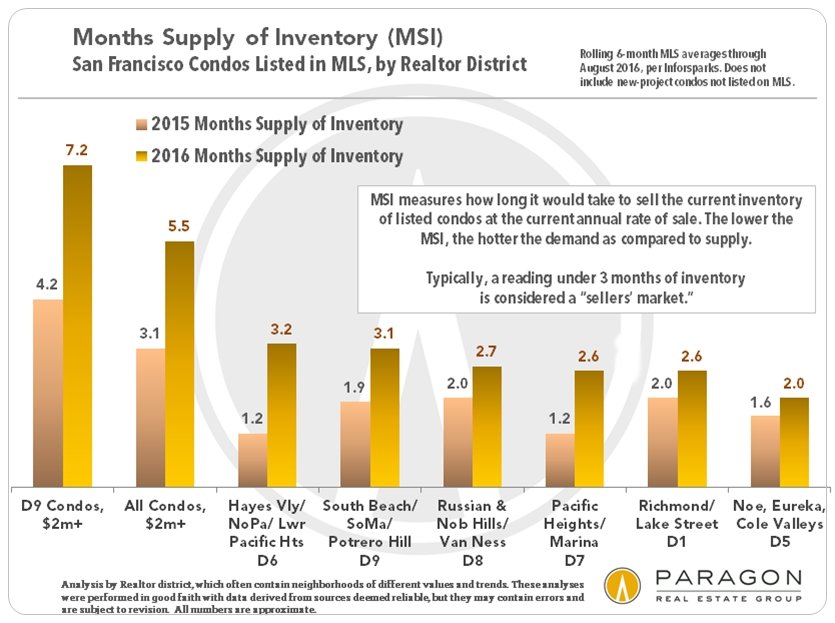 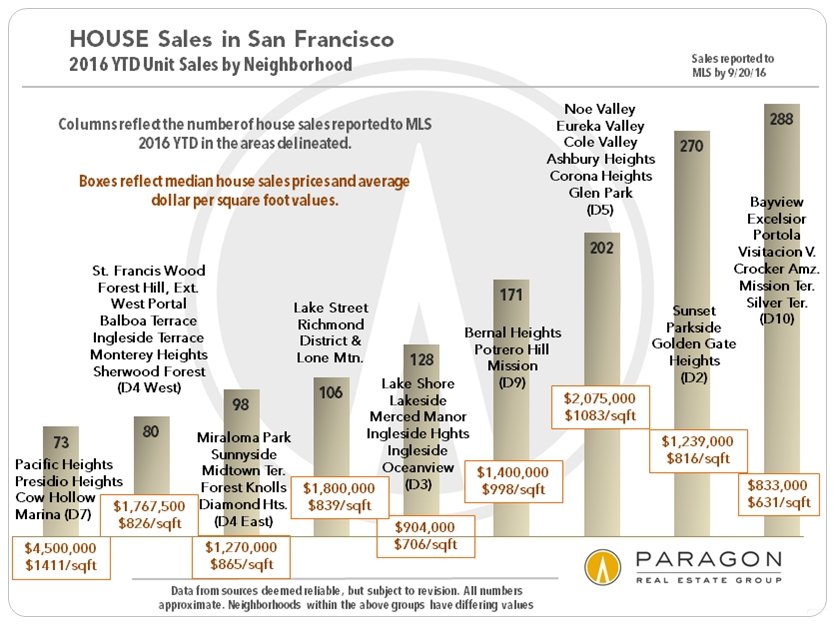 As illustrated above, the 3 most affordable districts for buying a house in San Francisco are also 3 of the 4 districts with the most house sales. 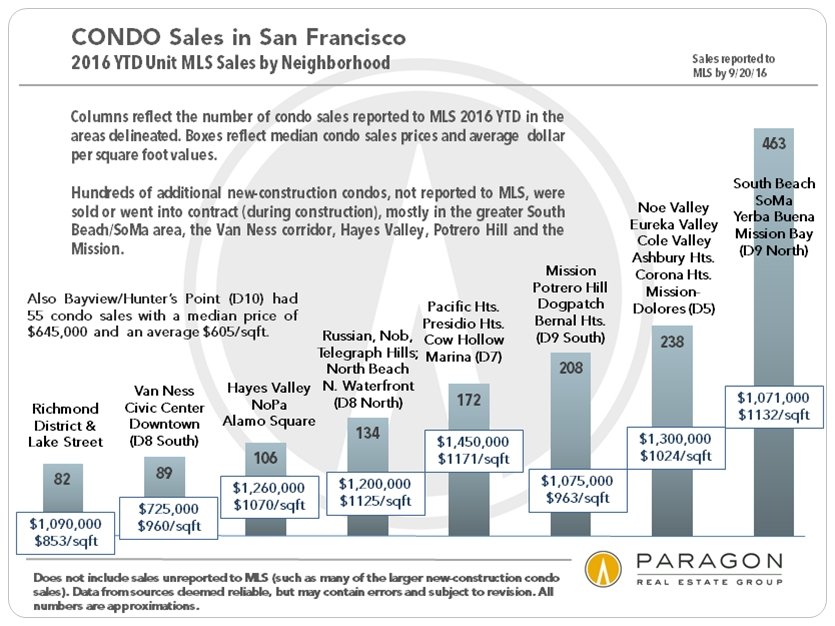 25 years ago, the greater South Beach/ SoMa/ Mission-Bay area didn’t even have an appreciable amount of residential housing. Now, if we add new-condo sales not reported to MLS (which are not reflected in the chart above), it is the area with the greatest number of condo sales in the city, more than twice as many as the second ranking district. It is also now the foremost area for luxury condo sales, having leapt ahead of the Pacific Heights and Russian Hill districts. This is the only place in the city where high-rise construction is currently allowed, and there is much new construction in the works. 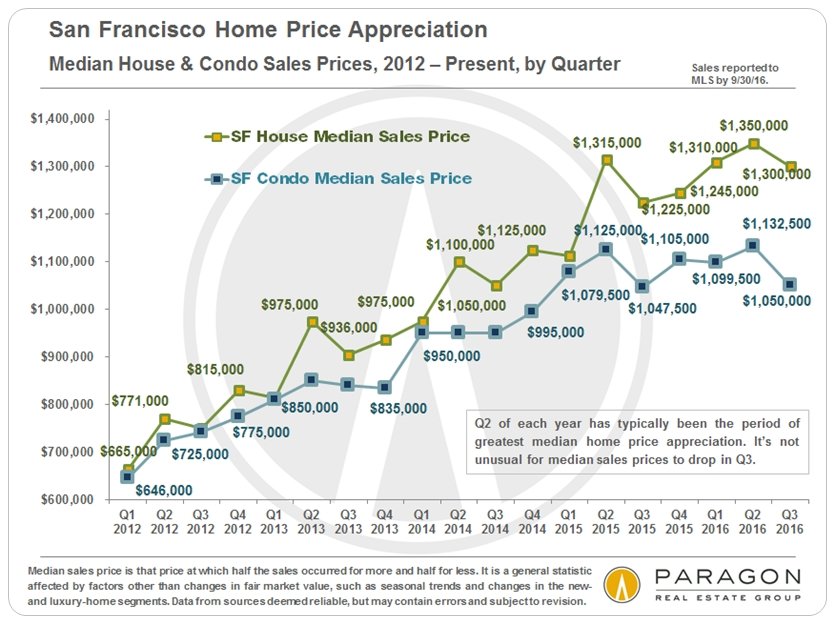 Median sales prices typically fall in Q3 from Q2 due to seasonal inventory and demand issues, and that occurred in 2016 as well. Year over year, the Q3 2016 house price is running somewhat above that of Q3 2015, while the condo median price has stayed essentially flat. 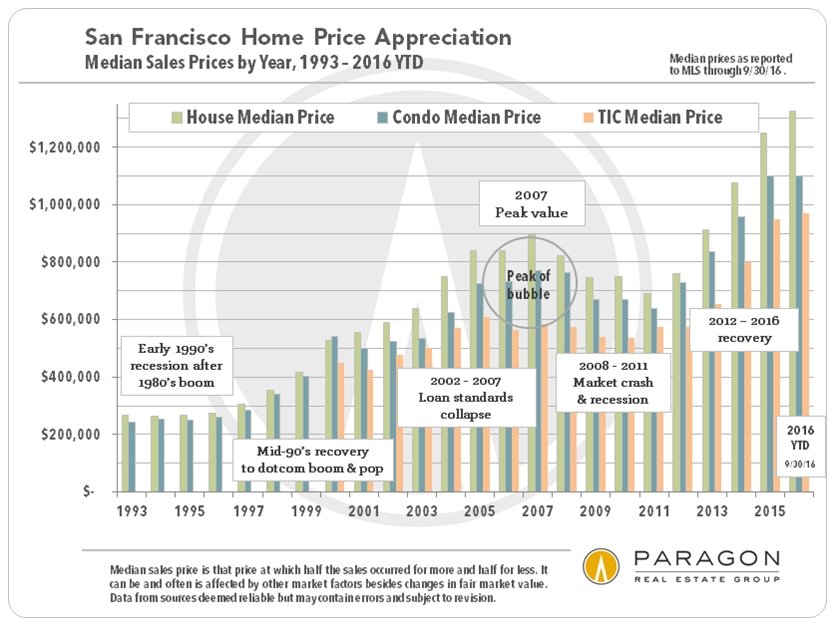 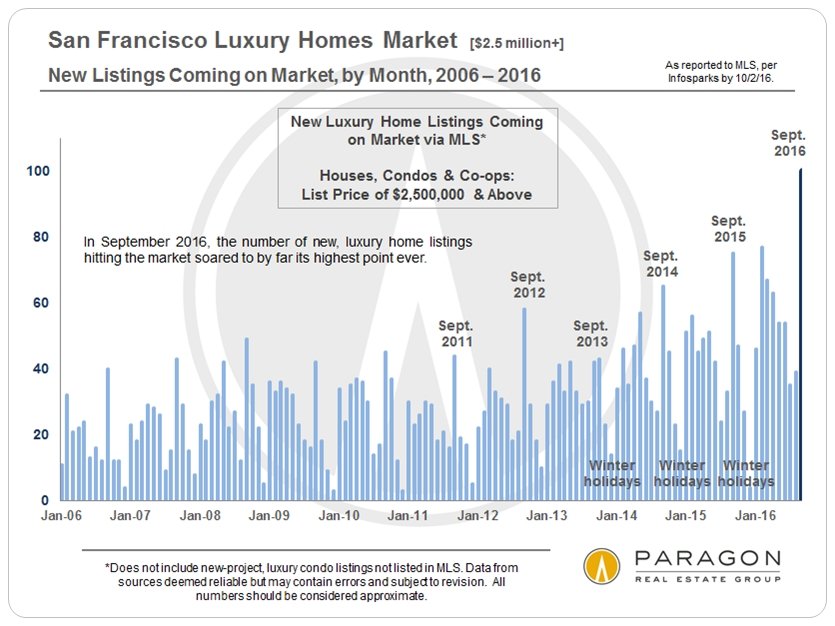 Even more so than the general market, the luxury home market is fiercely seasonal, with spring and autumn being much more active than summer and, especially, the mid-winter holiday doldrums. September is typically the single month with the highest number of new listings, which fuels the relatively short autumn selling season before the luxury market starts to go into hibernation in mid-late November. This year saw a particularly large jump in the number of new listings of homes of $2.5 million and above to by far the highest level ever.

Because the time between listings coming on market, offers being negotiated and accepted, and then the transactions actually closing sale is 4 to 6 weeks or more, it will be a little while before we have hard data on how the market responded to this feast of expensive homes hitting the market. 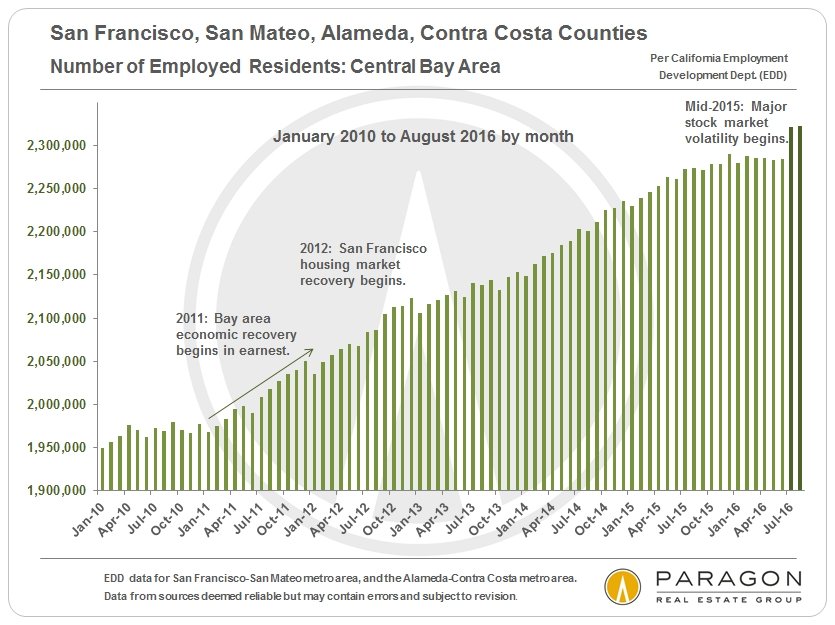 Hiring and the population growth it engenders play a huge role in buyer and renter demand. After peaking in December 2015, the number of employed residents in the 4 middle Bay Area counties fell by 6000 through June 2016, the largest sustained drop in 5½ years. This seemed to correlate with an apparent cooling in the high-tech boom. Then in July & August 2016, a sudden, new hiring surge added almost 38,000 to the employment numbers, hitting a dramatic new high. We will have to wait for the data of future months to see if this is part of a sustained second wind in Bay Area hiring (especially in high-tech), or simply an unusually large, short-term fluctuation.

These analyses were made in good faith with data from sources deemed reliable, but may contain errors and are subject to revision. It is not our intent to convince you of a particular position, but to attempt to provide straightforward data and analysis, so you can make your own informed decisions. Median and average statistics are enormous generalities: There are hundreds of different markets in the Bay Area, each with its own unique dynamics. Median prices can be and often are affected by other factors besides changes in fair market value, and longer term trends are much more meaningful than short-term. It is impossible to know how median prices apply to any particular home without a specific comparative market analysis.