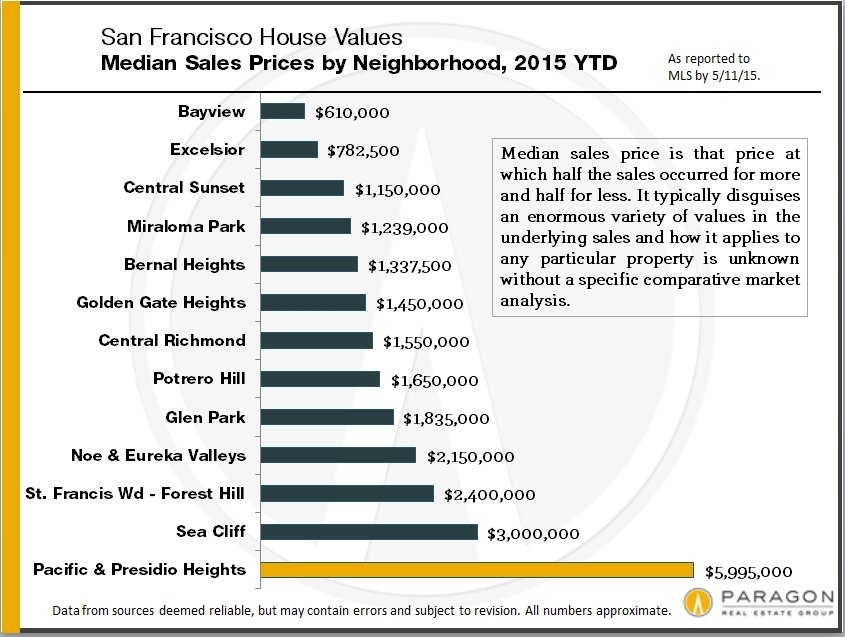 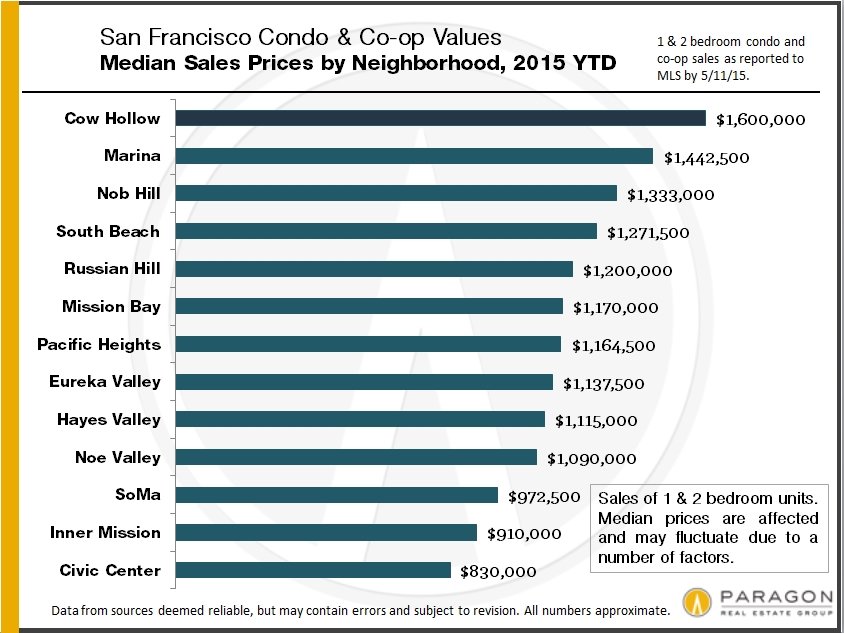 As the 2015 market has accelerated, median home sales prices have been hitting new highs in neighborhoods across San Francisco. Link to San Francisco Neighborhood Map 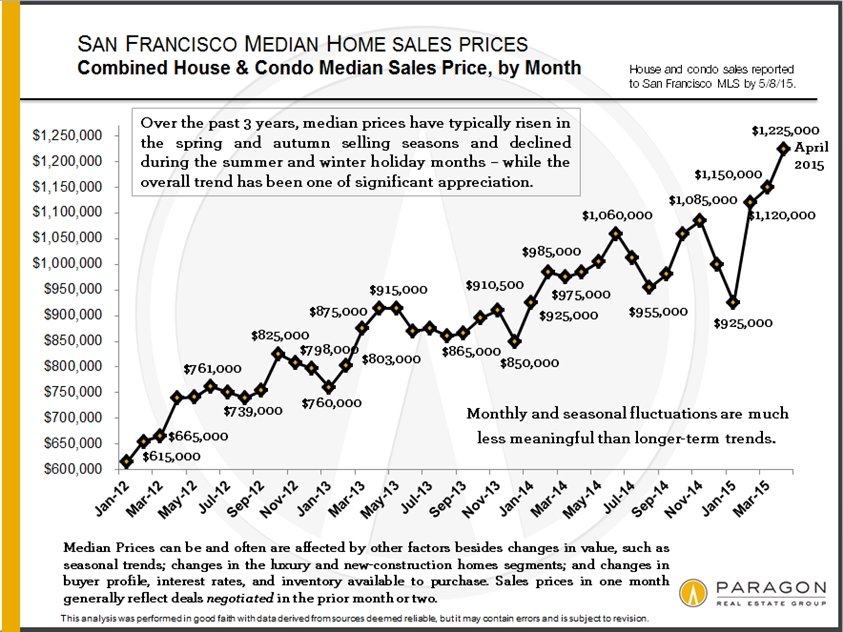 The chart above graphs monthly house and condo median price appreciation in the city since the market recovery began in early 2012. The 2 charts below are snapshots of changes in median sales prices in a sampling of 6 different SF neighborhoods from early 2013 to early 2015, one for houses and one for 2-bedroom condos. (The 2015 prices in these charts below may vary from those earlier in this report, because slightly different parameters were used.) 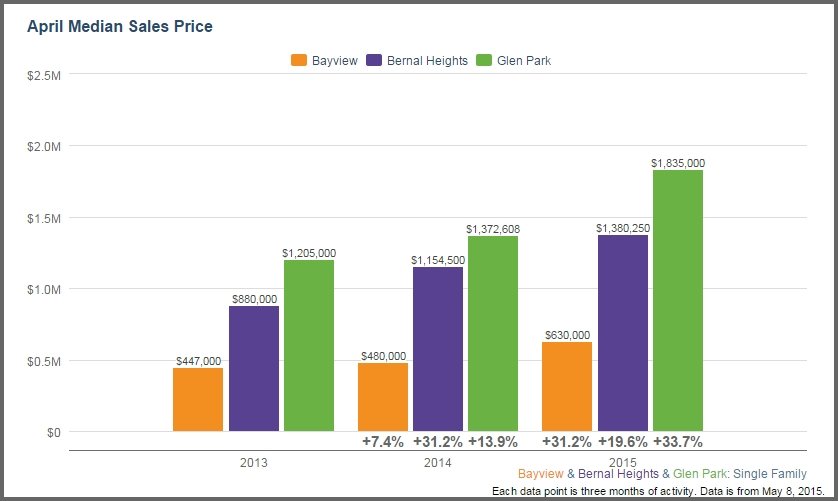 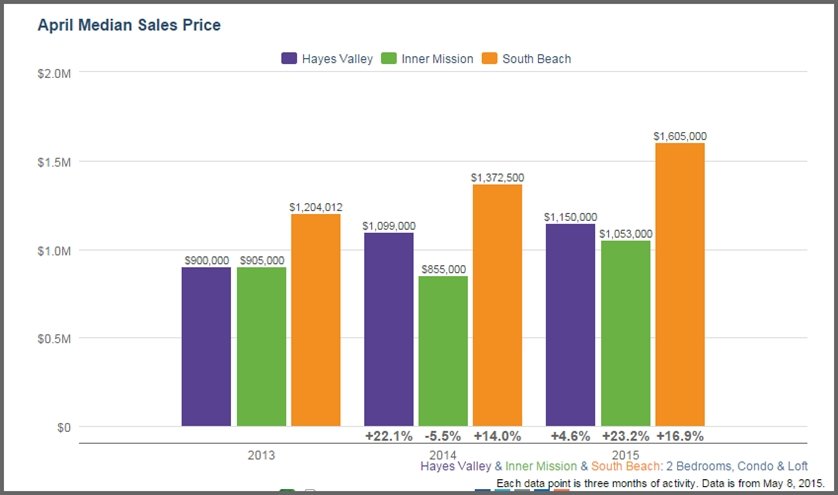 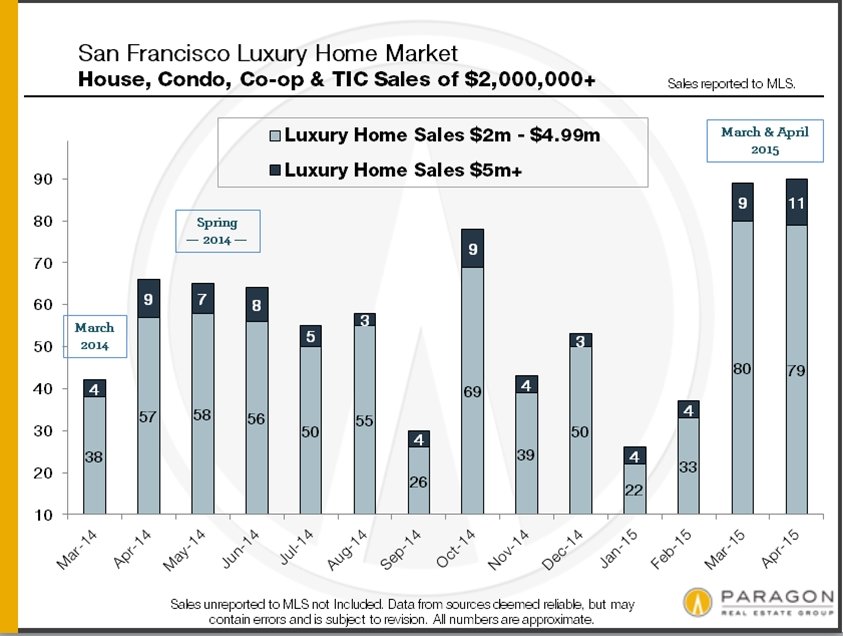 High-end home sales continue to hit new highs in San Francisco: Last spring was the hottest on record; spring 2015 is blowing through last year’s numbers. The chart above is from our updated luxury report, which can be found here:
SF Luxury Home Market Report 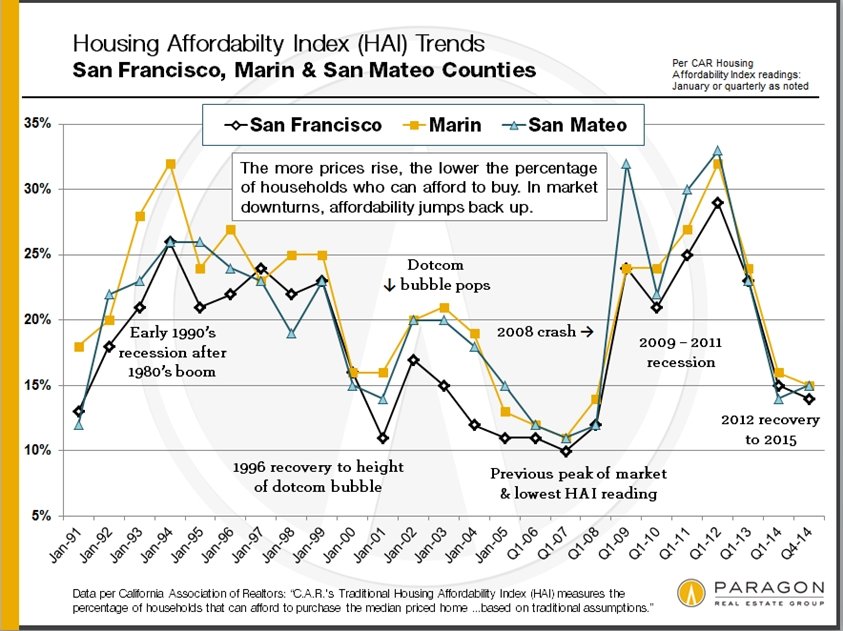 This CAR Housing Affordability Index (HAI) is calculated using median price, household income, interest rates and other financial criteria to determine the percentage of local households which can afford to buy. At 14% to 15%, San Francisco, Marin and San Mateo have very low affordability readings in comparison to other parts of the country – the Index reading is now 31% for the state and 59% for the country.

Affordability calculations are a complex and nuanced issue, especially in San Francisco*. However, one can’t argue with the general trend lines. When the market heats up and prices rise, affordability goes down; when the market goes into a recession, affordability rises. If affordability declines beyond a certain point, it may become an indicator of an overvalued real estate market. SF’s Index reading is still above the historic lows it hit in 2001 and 2007. Changes in interest rates can quickly and significantly affect affordability. 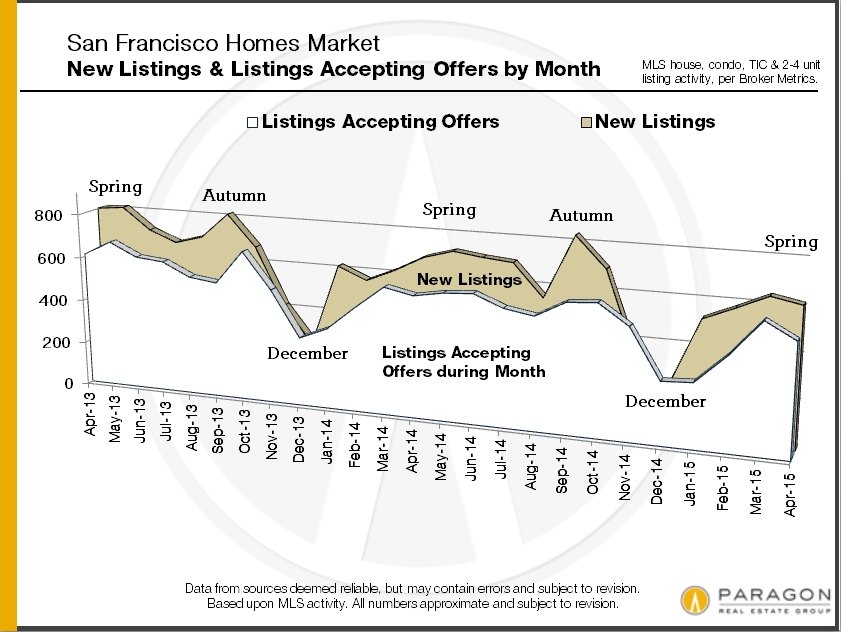 The above chart illustrates the seasonal ebb and flow of the market as new listings come on the market and buyers react by putting properties under contract. Spring is typically the biggest selling season of the year, followed by a large spike in autumn. Market activity usually slows in summer and plunges during the winter holiday season.

The two charts below are from our recently issued reports on the multi-unit building market, the first on properties of 2 to 4 units, and the second on larger apartment buildings of 5+ units. The second chart illustrates the parallels between rents and home prices in counties around the Bay Area. Regarding affordability: If someone’s choice is between paying a very high rent or buying an expensive home at today’s low interest rates and with all the tax advantages of homeownership, buying is typically the much better option financially over the longer term. But the devil is always in the details. 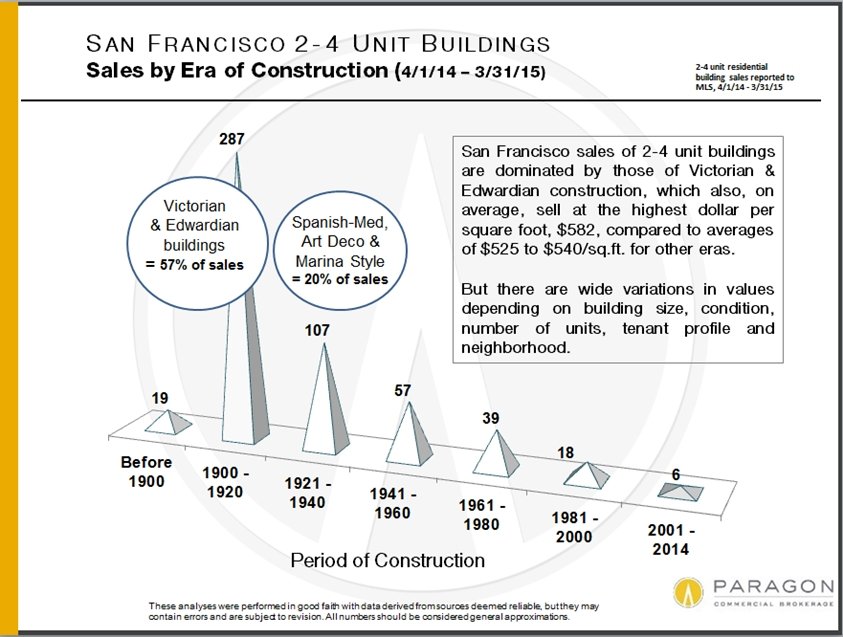 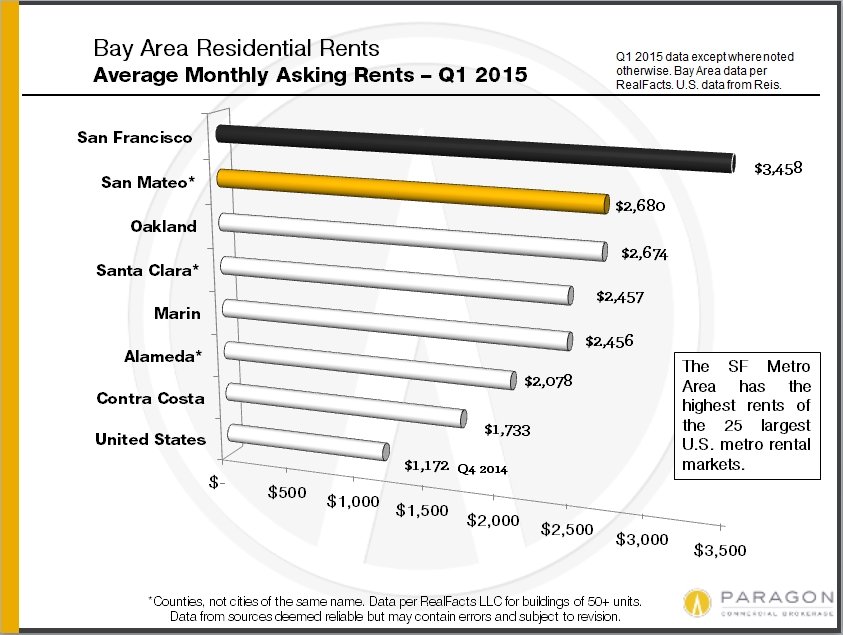 The full reports can be found here:

The first chart below and the map following it depict the current boom in new-home construction and the districts where new development is clustered. The second chart illustrates the growth of the condominium segment of the city’s housing inventory via both construction and conversion.(A lot more is coming.) The new-home development situation in San Francisco is fascinating – and a fierce political issue.

Our full report on the topic is here: Paragon Housing & Construction Report 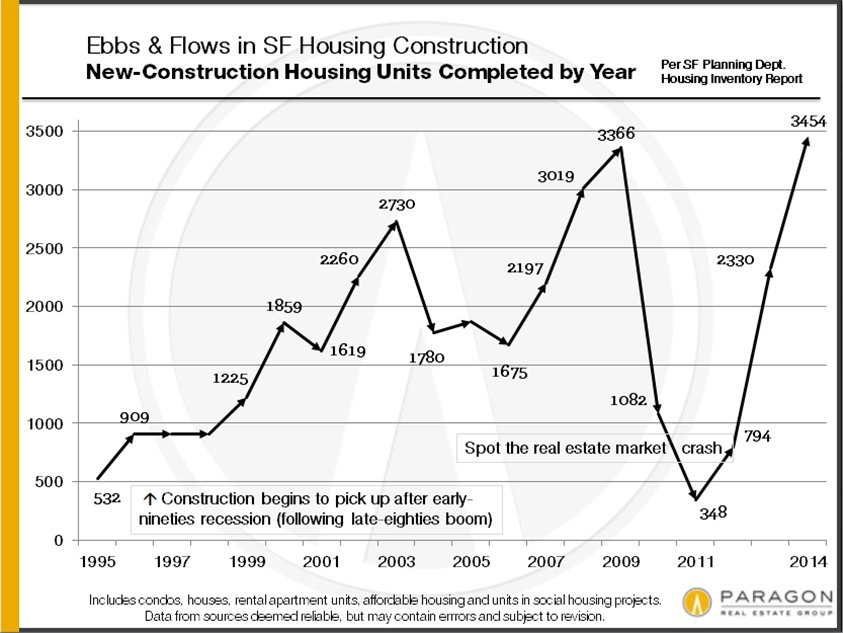 New home development often goes through gigantic boom and bust cycles. What complicates the issue for SF developers is that from start to finish, from creating plans for city review to completing construction, the process can easily take 4 to 6 years. Right now, both residential and commercial developers are making enormous bets on a long, sustained, up cycle in the SF economy and real estate market. 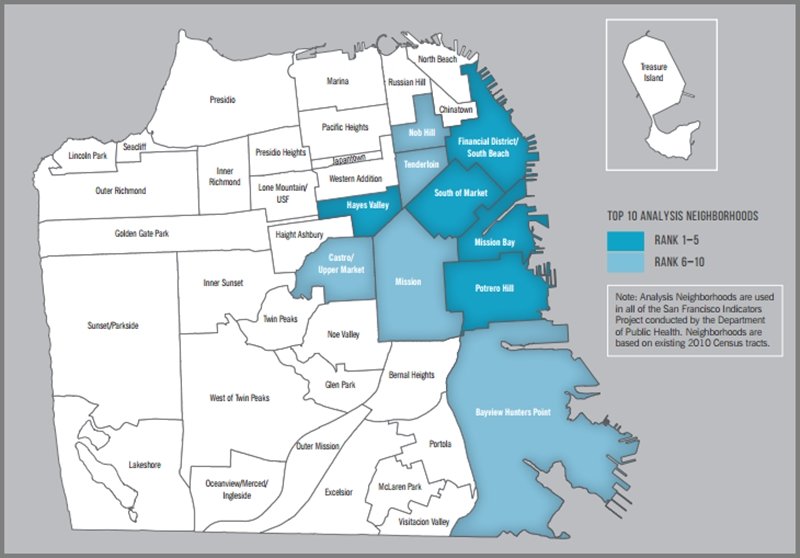 New residential construction is heavily concentrated around the Market Street corridor, the Van Ness corridor just north of Market, and in the large quadrant of the city that lies to the southeast of Market. This is due to the availability of large, previously commercial/industrial-use lots that can be changed to residential use, and the zoning that allows for large – sometimes very large – projects to be constructed in these areas. 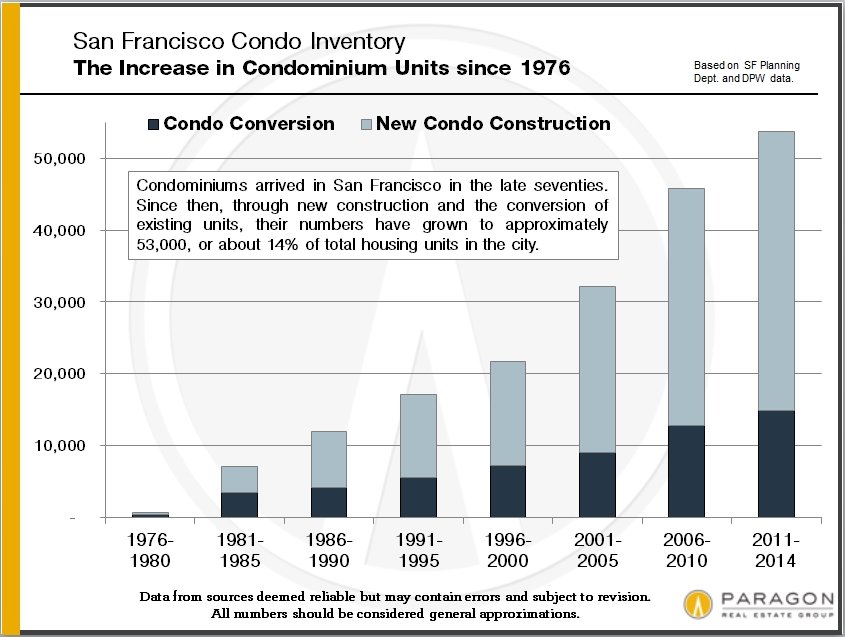 Though only about 40 years old, the condo sales market in the city is now larger than the house market. And 99% of all new construction being built for sale consists of new and usually high-end condos.

* A few “peculiarities” that may skew the housing affordability calculation in San Francisco are: 1) the city has an abnormally high percentage of single-resident households, 38%, which affects median household income figures, 2) unlike most counties, the majority of SF residents are tenants not owners, and the greater part of those are under rent control, and 3) the SF market is currently being fueled in no small part by large numbers of people moving into the city for very well-paid jobs.

Short-term median prices may fluctuate due to a number of different factors, including seasonality, inventory available to purchase, interest rates and significant changes in the luxury and new-home segments of the market.Longer-term trends are always more meaningful than short-term ups and downs.

These analyses were made in good faith with data from sources deemed reliable, but they may contain errors and are subject to revision. Statistics are generalities and how they apply to any specific property is unknown without a tailored comparative market analysis. Sales statistics of one month generally reflect offers negotiated 4 – 6 weeks earlier, i.e. they are a month or so behind what’s actually occurring in the market as buyers and sellers make deals. All numbers should be considered approximate.Please contact us with any questions or concerns.