It’s typical for the market to slow down during the summer months (not as bad as the Thanksgiving to New Year slow down but still a slow-down). However, looking at the Weekly Charts below, statistically there is little sign of a cooling market – which doesn’t mean that it might not be: these supply and demand statistics won’t change if a listing gets 3-5 offers instead of 10-20 as long as it goes into contract. But even if it is cooling – which is not a certainty – it would still be a very-high-demand/very-low-supply market by any historical measure.

When a market is this strong, it’s not unusual for demand to keep up through the third week of August. Some listing agents believe late July/August is a better time to list – with inventory so low – than after Labor Day, when new listings surge again and there’s more competition. Other agents always wait til September.

These weekly market charts are for SFD and Condo listings only.

The number of Active Listings has been falling since summer began and is now at a level roughly comparable with February; it’s about equal to the number available last year at this time. It’s not unusual for inventory to continue to drop as the summer progresses — until that turns around after Labor Day. September is usually the month of the year with the highest number of new listings.

The number of New Listings coming on the market has been falling from the spring “burst”, but new listings in the last 3 weeks are about 13% higher than the same period last year – which is a positive sign.

Over the past 5 weeks, new inventory is still being gobbled up as fast (actually faster) than it is coming on market: 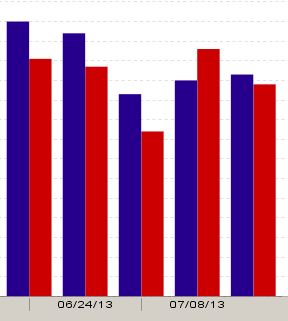 Percentage of Listings Accepting Offers: Except for the slight (typical) decline in the 4th of July week (you see the same thing in the Memorial Day week), the percentages have continued to be very high, similar to the percentages we’ve seen since mid-February (which has been a red-hot demand period). Two years ago, the percentages ran 6% – 7%; now they’re twice that.